Reviewing Heroes & Heroines, along with an upcoming superpowered game that I have, caused me to think about games designed to cover people with extraordinary powers. As it happens, at the moment I am not very fond of a lot of them. Champions suffers from a very clumsy game system, made worse by having to learn the system and spend a lot of time to create characters. This last is also a problem with GURPS Supers, but at least that system has developed into a very clever one that manages to deliver more "realism" for less effort than any other game I can think of. It's currently the one that I am planning on running my upcoming game in, but this post is part of a process there.

So, here are the games that are interesting me at the moment, along with links to where to get them.

Villains & Vigilantes — this is currently available in a new edition titled Mighty Protectors, but I haven't had a chance to evaluate that edition yet. I am mostly interested in the 2.1 edition linked here. For one thing, there are no point-buy systems in version 2.1, and I understand that Mighty Protectors has fallen prey to that seductive mechanic. One of the great things about V&V was always that it was just a matter of generating basic stats, rolling up—or choosing—some powers, and filling out the front-loaded calculations. That's part of the reason that I had the FBI Guide series.

Guardians — This is a little attempt to portray what the Original Adventure Game might have looked like if the authors were more interested in comic book superheroics than pulp fantasy. Like V&V, creating a character is more about picking a set of powers than spending points. That's really good from my perspective.

Supergame — The point-buy mechanic for creating characters is less intrusive here mainly because the game is very fast and loose. Still, it's less interesting to me than others in this list, mainly because of the weird, calculator-intensive rules (seriously, you roll d% and multiply that as a fraction of the base damage to find out how much damage you actually do, but only in hand-to-hand combat). Also, like most point-buy games, the players have to learn how play works in some detail before they can really create reasonable characters. There is a supposed third edition of the game now, but it is apparently a complete rewrite by new authors that only keeps the title.

Heroes Unlimited — I feel weird putting this in my list, since I really got most of my experience of it in the first edition, which we mockingly called "Heroes Limited" due to its inability to really handle the genre well. I understand that the second edition has fixed that issue, so I am bringing it back into consideration for my table. A major advantage of the game is that players can pretty much choose to use any of several character creation systems, from relatively freeform to relatively point-buy.

Marvel Super Heroes — The main disadvantage here is that the game is out of print and pretty expensive on the aftermarket. On the other hand, the PDFs at the Classic Marvel Forever website are more or less designed to be printed out, so that's an option. Still among the best possible superpowered games out there. Just don't roll on the tables in the Ultimate Powers Book, since they're really badly done. The selection is great, though. Pick your powers, I guess, and work out the power levels with the Referee.

Heroes & Heroines — This is a really unlikely choice for me, since it suffers from multiple problems such as being out of print, using a point-buy system, and so on. Still, it's not totally off the table for me because the sketched-out system is a perfect place to land a "rulings not rules" game. Still, Guardians is probably a better choice there.

GURPS Supers — Look, this is the only game that can actually handle Wolverine's adamantium-laced skeleton, and frankly I've had some of my superpowered NPCs inspired by the list of advantages and powers in the game. It's also the only game in print that can, more or less, do Dune just off the shelf, including weird things like having access to ancestral memories. The Supers supplement includes, among other things, the best discussion of Precognition as a superpower in a game that I have seen. If nothing changes, this is the game that I will be running. If only it had options to not be point-buy. Also, Wildcard Skills annoy me and the templates here rely on them to a degree, to the point that it's difficult to root them out of some of the templates—guess why I'm considering other games.

Mutants & Masterminds — I am not really fond of D20 games, except that they've allowed retroclones and such to happen, but this one seems alright. Mainly, I'm interested in the Paragons setting, which is pretty close to what I intend for my setting, and the Mecha & Manga supplement covers magical girls, which I do love. It runs a line between point-buy and not by allowing the player to effectively create a new class for their superpowered character or choose a pre-designed, relatively generic one, and then using that in a D20-like framework. Still, Guardians, and for that matter V&V, seems to cover most everything here and better.

Savage Worlds — On the one hand, the dice mechanic revolts my statistics-oriented mind, but on the other hand all of my players are both familiar with and fans of the game. Less intrusive point-buy system, but still a point-buy system. I'll leave it on the table as an option, maybe. I'll have to look at the superpowers system first. I have a suspicion that it isn't robust enough to cover some of my more outré characters.

Man, it sucks that Golden Heroes and Super Squadron are both out of print and in-demand enough to be really difficult to get. Not that I'd necessarily pick one of those, but they would provide a couple more options that wouldn't be terrible. 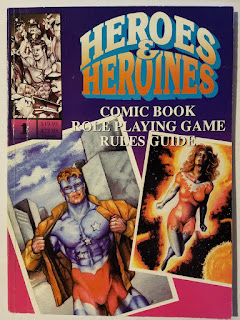 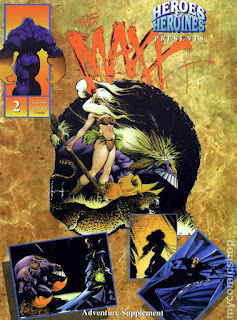 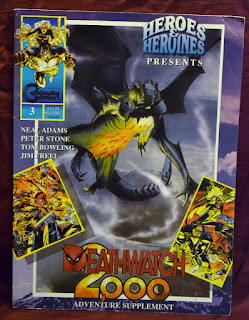 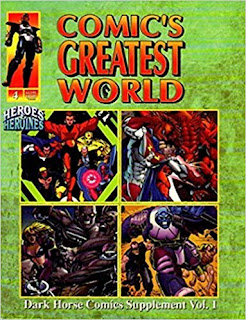