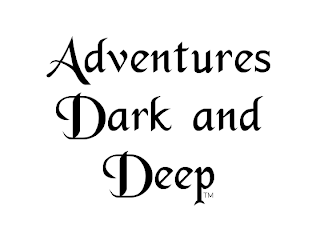 I was hoping to make it out of the year without supporting another gaming Kickstarter. Spears of the Dawn was supposed to be it, the last of them that I would support at least until the Car Wars Kickstarter kicks off next year. But nooooooooo. Along comes Joseph Bloch, of Greyhawk Grognard fame, with his Adventures Dark & Deep project. As he puts it:

"Adventures Dark and Deep™ is an attempt to explore what the world's most popular role-playing game might have looked like if its creator had been allowed to continue developing it, rather than leaving TSR in 1985.

This work is based on extensive research into Gary Gygax's public statements about his vision for the next edition of the game, using the game's 1st edition rules as a jumping off point. It's not a retro-clone, but an entirely new game with a very familiar feel."

Having seen Mr. Bloch's writings on the history of the hobby, I trust that he's done a fine job with figuring out what Gary might have wanted to do with a second edition of AD&D, and so I am looking forward to seeing this project and helping it to be as well-made as possible. The Kickstarter is just to get good art for it, as the game is going to be published regardless. The rules are already written and playtested, so it's just a matter of getting the thing to look pretty.