Traveller5: The Kickstarter Campaign Is Live 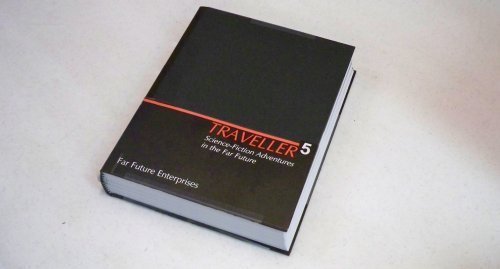 OK, for a lot of people, D&D is where it's at. I do like me some D&D, for sure, but my main gaming love has always been Traveller, ever since I first saw a copy at the small bookstore where I got all my earliest gaming stuff. It had a book on starships, for Pete's sake! While Mongoose has had an edition in print for the last few years (and it is OGL, so anyone can publish material for it - and I have vague ideas of using it as the basis of a variant SF game to publish), the real deal has been away for a long time. The last official version from Marc Miller was Marc Miller's Traveller, the fourth edition of the game (with a couple of 0.5 editions in there, as it were). It was a problem for various reasons, most importantly that there were extensive problems converting the electronic files to match the printer's software (or something like that - I never did find out the real story, all I know is that there were significant errors when unusual characters were in use).

Anyway, it looks like all that is in the past, as the long-awaited fifth edition, Traveller5, is the subject of a new Kickstarter campaign. For a hundred bucks, you can get a signed hardcover of the game (which is extremely complete, and 600 pages or so), Traveller dice (one black, one white, and one red), a CD-ROM of the PDFs, and other stuff. As you add more to your pledge, you can get other stuff, but mainly it seems to be a card giving you a land grant and title on an Imperial world, plus the satisfaction of helping out above and beyond. At the really high levels, you can get your (character's) name attached to examples in the rules.

Anyway, I'm all about this. You might be, too.