Well, here it is, the first Swords & Wizardry Appreciation Day. Perhaps this will be the only one, or perhaps there will be more. Certainly, a number of the people involved are making posts all week! I'm just doing the one, though, because I am a lazy blogger.

Of all the retroclones, Swords & Wizardry was the most interesting to me from the start. Where Labyrinth Lord and OSRIC presented the rules very closely to the source, S&W chose to make a couple of significant changes that streamlined play (and also moved the rule sets further from the possibility of the current D&D copyright holder choosing to engage in legal shenanigans to try and suppress the game). It turned out that the legal worries were not very important but, as often happens when constraints are placed on creativity, it resulted in some really interesting design choices that further illuminate what we mean when we talk about "D&D", and even roleplaying in general. For that alone this is an important set of rules. However, it is also an elegant and fluid set of rules that works well at the table.

Swords & Wizardry comes in three basic "flavors": Whitebox, Core, and Complete. Each of these represents a version of the original D&D rules set, with varying amounts of influence from the four supplementary booklets that were published for use with it. S&W:Whitebox sticks almost entirely to the original three booklets that came in a white box. S&W:Core adds material from the first supplement, Greyhawk. S&W:Complete adds more material from the supplements, and furthermore continues on to some of the early options presented in The Strategic Review and the first few issues of The Dragon magazine (before it lost its "The"). In addition to these basic "flavors", other people have put together versions that emulate the Holmes "Blue Book" edition of Basic D&D, that reskin the whole thing for Japanese-style fantasy adventures (Ruins & Ronin), and so on. In addition, there are a few supplements that alter the basics to better fit specific settings (my own favorite is Savage Swords of Athanor). The Whitebox and Core versions are published as POD products on Lulu.com by Mythmere Games, while the Complete version is published in print by Frog God Games. Over there on my blog's sidebar, there is a link to the online SRD for S&W:Complete, though. Also, Mythmere provides free versions in PDF and even .rtf format for those who want to use the text to write their own version.

S&W:Whitebox strips the game almost to its barest essentials. There are only three character classes: Cleric, Fighter, and Magic-User. The stats have very minimal effect on characters, generally giving only a ±1 to rolls affected by them, though experience bonuses are the real benefit. Each character class starts very similarly in hit points, with Clerics and Magic-Users getting a single d6 hit die at first level, while Fighters get a d6+1. These quickly change as the classes go up in level, with the Magic-User rising only to 3d6 at fifth level, while the Cleric has 4d6 and the Fighter 5d6 at the same level. Every character has a saving throw determined by level, with the Cleric and Magic-User starting at 15 and the Fighter at 14, each improving by 1 point per increased level. This roll is used for any instance where a saving throw is called for, though certain specific situations may have modifiers (dwarves, for instance, get a +4 to saving throws versus magic). There is an option to use a saving throw grid derived from the original game, for those who are unable to function without save categories. Characters are given experience charts up to tenth level, with anything higher presumed to be according to however the Referee wants to handle it. Magic-Users do have an expanded chart indicating their spell use at higher levels, since sixth level Magic-User spells aren't available until a character reaches twelfth level.

Damage of all weapons, as in the original edition (and the Holmes Blue Book), is always a single d6, though a modifier of ±1 is given for heavy or light weapons. Armor Class, in a particularly interesting move, is given in both the traditional descending form and also in the innovative ascending form of the WotC editions of D&D. So, an Armor Class might be listed as 5[14], with the number in brackets being the ascending form. The license to use the rules does require that this format is always used for Armor Class, so derivative games need to do so. This ensures that the players and Referee will be able to choose which they prefer at the table.

Other than lists of equipment, spells, and monsters, and a system for placing treasure, that is it. A completely simple set of rules that avoids the sometimes odd emergent behavior and occasional outright missteps of later editions of D&D. 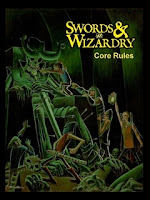 The somewhat longer S&W:Core adds a number of things from later supplements for the original D&D, such as an optional Thief class, variable weapon damage by weapon type, variable hit dice per class, and expanded spell listings up to seventh level for Clerics and ninth level for Magic-Users. There are a few spells that I'd use the Core versions over the Whitebox ones (Contact Other Plane, I'm looking at you), in part because they are actually closer to the original writeups in the three original booklets, and in no small part because they work better than the Whitebox versions. 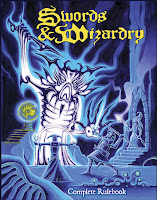 S&W:Complete finishes this by adding all of the fundamental classes that most of us got used to in AD&D, such as Rangers, Paladins, Druids, Monks, and Assassins. 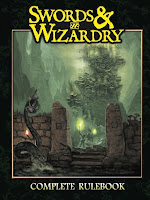 For myself, I am especially attracted to the stripped-down, house-rule-ready version that is Swords & Wizardry: Whitebox. I am particularly attracted to stripping out (arguable) mistakes like the Thief class, as well as questionable "improvements" like variable hit dice and variable weapon damage. A house rule that gives secondary skills to characters whose "class" is simply a description of whether or not they use magic spells, such as the skills system in Savage Swords of Athanor, seems like a good way to avoid the need for a large number of character classes while also separating character class from the idea of a character's profession. Merging that with, for instance, the secondary skills system that is in Adventures Dark and Deep might be a fruitful way to go, actually.

Another useful item from Mythmere Games is the Swords & Wizardry Monster Book, which includes (according to the back cover) 265 monsters from the original books (0e-2e), 3 monsters from the third edition, 9 monsters from Monsters of Myth, and 186 monsters never before seen in print. Some of the entries are dull (it's difficult to make a wolf interesting, but it is something that needs to be statted out), some are interesting (the Wandering Hole!), and some are spectacular (such as, for me, the Tsalakians and Kzaddich, the Artificers of Yothri and their Amphorons, and the various Toad monsters such as the Yurmp and the Todawan Masters, among others).

Swords & Wizardry Appreciation Day, which is going on as you read this (my entry will go live in a few hours), includes a few sales which will last only one day. Here is information about two of them:

From the S&W online SRD:

Email ThisBlogThis!Share to TwitterShare to FacebookShare to Pinterest
Labels: Swords and Wizardry 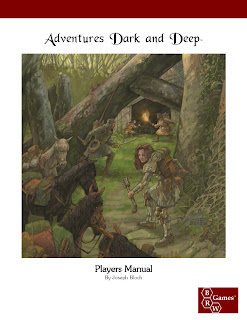 I wrote the basics of this review as a comment over at Mr. Bloch's excellent blog, but I figured that I'd bring it here and expand on it. You can go to his blog for a link to purchase the book.

The idea of Adventures Dark and Deep is a speculative one. If Gary Gygax had not been forced out of TSR and had been allowed to develop AD&D in the ways that he wanted, what would the game's second edition have looked like? To build this, Mr. Bloch researched every word that Gary ever wrote on the subject, and compared those to work that he did in later games such as Dangerous Journeys: Mythus or Lejendary Adventures. Of course it is not exactly what Gary would have written, but it does look a lot like what he was moving toward.

I support this idea enough to have funded it through Kickstarter, at a level that would get me the hardcover of the Players Manual (there will be two more volumes, one for Gamemasters and one with monster descriptions; this is obviously the basic format of every edition of AD&D, as well as the WotC editions of D&D). My hardcover showed up on Saturday, and I am very pleased with the physical quality. It's not perfect (it uses, as usual for a POD product, glued rather than stitched signatures, for example), but it is at least as good as most products. The ink is clear and doesn't smear, the paper is smooth and has a good feel, and so on.
The text, as well, is high-quality (even if it does retain some things from Unearthed Arcana that I would have liked to see developed further - notably, the Chromatic Orb spell, which has always just been removed from my games), and I am very, very pleased with the work that Mr. Bloch did on this. I am considering using this ruleset in place of 1E in the future. I am especially happy that he chose to include the weapon vs. armor type table, even if he did relegate it to an appendix as an optional rule. On the other hand, he also rationalized it by separating the armor types from armor classes.

For those considering it, if the idea strikes you as a good one, then the product is well worth the $30 price tag for the hardcover.

(I also received my copy of Traveller5 on Saturday, but that is over 600 pages, so it will be a little while before I can say anything about it. Finally, sorry about the radio silence for the last couple of weeks. I hope that will be over now.)