How To Make A Superhero 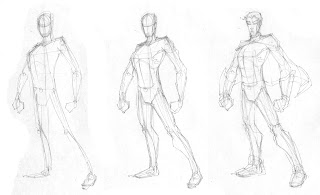 When I am writing up the FBI Guide entries, I have a process that makes the whole thing go by more quickly. As I noted in the comments to the entry on Rainbow, my process is basically to roll up the stats, pick a set of powers that fits the character role in my head, roll the values of the powers, and figure out the rest per the V&V rules. It's amazing how quickly that goes, actually. The thing is, though, that there is more to the process than the simple mechanics of making a character. Each one has to fit into the world that exists (primarily) in my head.

The first thing I do, actually, is make a list of names, basic power outlines, and so on. I try to alternate male and female characters (and if I can't for whatever reason, I work hard to make it up in subsequent entries). Sometimes, the name will inspire the powers, sometimes it is the power group that occasions the name. A few of the characters are inspired by specific photos, by characters from comics or movies, from other games, or even a few taken from V&V materials directly (I probably won't be posting those here, though, since I doubt that it's legit to simply take the already published stats and republish them here; the names are in the first FBI Guide entry, though). Occasionally, I delete one or more if I come to think that they won't fit the tone of the world. For instance, I recently removed one Davy Jones from the list because I didn't want to deal with the implications of more than one death-bringer (spoiler!) If I haven't based the character on a picture, then this is the point where I hunt around to find one. Google's image search is the most important tool here.

Have you noticed what's missing yet? The detailed background of the character is, to my way of thinking, one of the least important elements in a superhero setting. The characters are, more than in most settings, symbols. As a result, there may be some broad aspects of their backgrounds that are important (but not necessarily!), but the details can be filled in almost at whim. So, the last step is to write up some kind of history for the character. This may also include figuring out the mundane name of the character, since that is usually not nearly as important as the code name given by the FBI Guide writers.

So, what I'm saying is that superpowered characters are more like metaphors, and this is reflected in the way that I create them and integrate them into the setting.