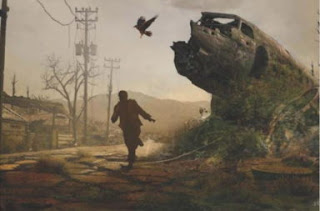 My campaign of GURPS set in my own world of the Deindustrial Future is winding to a close. I have committed to running another GURPS game after that, this one being about superpowered humans in the modern day. It's going to try to explore some of the disrupting influence of superpowers, which should be interesting, in the sense that I would not want to live in that world. I  am increasingly certain that, while I still like GURPS quite a lot, it is dropping down my list of favorite systems pretty fast. Still, some settings I want to do are easier to do in that game than in others, since other games would require inventing and writing down game statistics for things and such, where those statistics already exist or are easily customizable in GURPS. It would be so much better if there were some reasonable way to randomly generate characters. Also, GURPS allows for some superpowered characters that are not possible or are difficult to depict in other systems.

I have a friend, a great Lovecraftian fiction fan, who has decided to give running Call of Cthulhu a try, and he is learning very quickly and doing very well. So, that's a second group, and one that is growing. I'm finding that to be a lot of fun too.

One of my players for the GURPS game is now running AD&D 1st edition, attempting to play mostly by the rules as written (no psionics, a few other small changes). We've had two sessions so far, one spent doing a large combat mostly so that we could get the feel for how the AD&D combat rules as written work in practice. It's so much easier than some people say to use weapon vs. armor type, weapon speed factors, charge rounds, and so on. Even so, since it was completely new to some of the players, and years since those of us who had ever played that edition had played—and even then, we weren't really playing by AD&D rules, but rather a streamlined form of B/X or BECMI using the AD&D tables—the second session was completely taken up by that one combat, as we looked up various pieces of information. Even there, we missed important information about how Clerical Turn Undead worked in that edition, but we'll get it next time now that we know.

Playing AD&D has, perhaps paradoxically, re-inspired me to work on my update to Fantasy Wargaming. To do that properly, I think that I'll need to play it as it is in order to see how things work and understand how best to approach any changes. It's been since 1982 or so that I last played that game, and my memories of it are a little foggy. I do remember that the game worked just fine, so it's definitely not "unplayable", as some allege. I do think that there are some areas that I will be changing pretty drastically, such as formalizing fatigue a little more given how important it is as a limiting factor on some activities, changing wounds to conditions instead of a pool of points, maybe tightening up the magic rules some. I have a feeling that I would want to tighten magic back toward things that were supposed to have happened, either as actual magic or as miraculous events given the close affinity of religious miracles with magic in the system, rather than the very wide-open system given—or perhaps I won't, and maybe just tighten up the rules some as they stand, or even work out a way to make it even more flexible. The question is how I am going to manage to get some play of that game in, given the limitations on which days of the week I have available for gaming. I have some ideas on how to make that work, so we'll see if I can get that working.

Which does remind me that I still plan on returning to the series on real magic and how it can be depicted in gaming. Let's just say that the source of inspiration for that series has gone silent for the moment, though I expect it to begin nagging at me again any time.

I've committed to finishing up my conversion of the meta-tasks of the Marc Miller's Traveller (aka T4) supplement Pocket Empires into MegaTraveller equivalents, even though I have no ability to test the rules. That is going slowly but surely.

I've been occasionally noodling around with ideas about running a PBEM game of Realms of the Unknown, which would require me to set up a better record-keeping system than I have managed to put together yet. It's definitely been moved from the back burner to somewhat active development, though. I'm not sure how the setting would look yet, as I'm probably going to wait to work on that until I have more useful tools for that sort of thing.

So, given that my gaming priorities have been changing now that I am back to gaming mostly regularly, let's give a new list of my top 10 games, or really top 12 but who's counting:

Honorable Mentions: Flashing Blades, Adventures Dark & Deep, Space 1889, anything Basic Roleplaying but especially Call of Cthulhu (and I guess I haven't mentioned that the player who is running AD&D has been low-key hinting that he'd like me to run RuneQuest 3rd edition, which he loved when I ran it many years back, so that's another thing that is impinging on me; if I did, I'd have to choose whether to run it in the default Fantasy Earth*, Glorantha, or a setting of my own design that I've had simmering for a few years and is in fact a development of the setting I used for that game of so many years ago), Lords of Creation, The Arcanum (1st or 2nd edition, I haven't seen 3rd or the 30th anniversary editions yet), In Nomine, Guardians (the superhero RPG based on original D&D), Delving Deeper, Pendragon, Lace & Steel, Marvel Superheroes RPG, Realms of the Unknown.

Settings that I am working on to varying degrees of effort: the GURPS superpowers one, an authentic-medieval one with monsters and such set around the Third Crusade for Fantasy Wargaming, a feudal-medieval-authentic world based on the 20 kingdoms of the SCA that draws loosely on the actual history and notable events of that illustrious organization plus added fantasy (this would be intended for any of Chivalry & Sorcery, Fantasy Wargaming, Pendragon, or Hârnmaster, or really any game that can handle an authentic medieval feudal setting), a setting based on the world of Lords of the Middle Sea—which is an obscure wargame that Chaosium published back in the '70s—and a more detailed deindustrial setting set some time in the further future that doesn't rely on so many fantastic elements as the one that I am currently finishing up. I've also spent a few brain cycles on the Flanaess Sector idea, but it hasn't really gone anywhere lately.

Yeah, as usual, I have put way too much on my plate, but hopefully I can actually turn some of it into practical use.

*The Fantasy Earth setting for RQ3 was set somewhere roughly around the 8th or 9th century, probably, given the territory available to the Byzantines in it.