The Reward from The Animation Workshop on Vimeo.

This is a really good animated epic fantasy. It includes everything you need: epic visuals, character arcs, conflict, fantastic situations, and all of it in nine minutes.

However, the thing about it that I like most is that it exemplifies why the D&D formulation of "zero to hero" is awesome. Starting characters who already have power and authority are not nearly as interesting as ones that have developed those in play.

Also, there are just a couple more days in the poll about the next Obscure Games review. Vote! 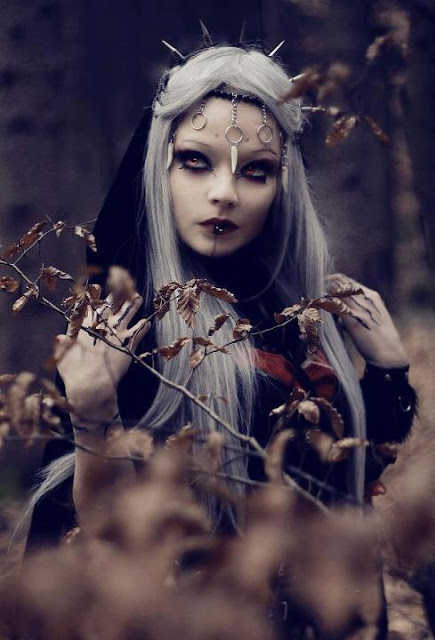 No idea who the model is. I found the picture on Fuck Yeah Gothic Makeup.

[Obscure Games]What Should I Review?

Over on the right sidebar is a new poll, asking which games you are interested in reading an Obscure Games review about. It will only be up for a couple of weeks, so vote early and vote often!

You can select as many of the listed games as you like. If you need a brief description of any of them, feel free to ask me here. 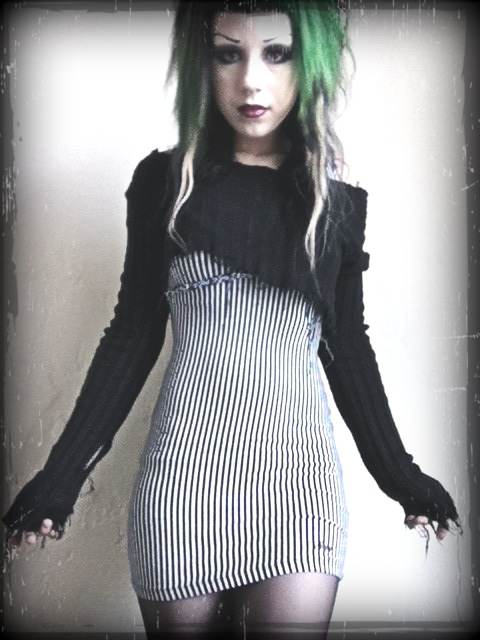 I don't have much to say at the moment, but here are some things that have been going through my head in relation to games.

- I guess I'm the only person around who isn't thrilled with Tunnels & Trolls. I'm happy for those of you who have been waiting for this.

- I don't know what to make of the things going on with Dwimmermount. I'm sure that it will work out in the end, but I am sadly reminded of the problems that plagued Space 1889 when it was first published.

- It's amazing how many things can go wrong with a boardgame. Still, Ogre is a great game and everything will be excellent, I am sure.

- It's been so long since I've created an adventure in the old style that I forgot how difficult it can be to design a secret door. Does anyone know of any resources that outline different types of secret doors?

- I'm developing a more precise understanding of what my ideal game should look like. Sadly for me, there is no published game that sits in exactly that sweet spot (I'm pretty sure that it's somewhere in the space between OD&D, Runequest, GURPS, Swordbearer, Flashing Blades, Pendragon, and Hârnmaster). I suppose that as my understanding becomes more complete I will be designing something that works there.

- I want to do another Obscure Games review, but I'm just not sure which game I want to do.  Maybe I'll do another poll to find out what other people want to see.

- Pathfinder MMO. But it can't use the Pathfinder rules in any way. O… K? Things have gotten weird in the mainstream gaming companies.

- I played the new X-Wing miniatures game yesterday. It was fun, and feels like flying space fighters in the Star Wars universe should feel. It helps that I won both games (I flew an X-Wing against two TIE fighters, the first time using the quick start rules, the second using the full rules), though the second game was extremely close - I actually lost until my opponent recalled that he wasn't allowed to fire in the situation we were in. I got the opportunity to exclaim, "I can't shake him!" So, that was satisfying. 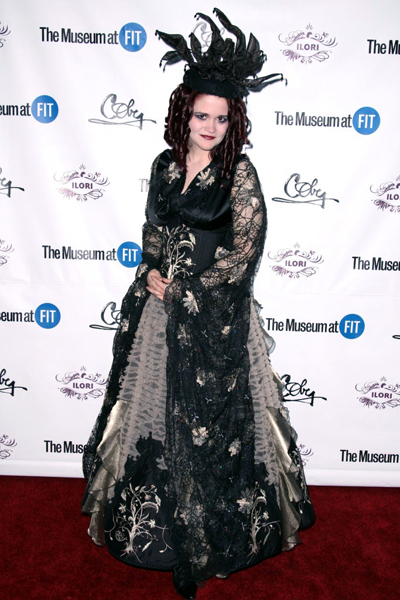 A few weeks ago, I included a goth modeling a dress designed by Kambriel. This is the designer herself.

OK, at long last I've been getting to a finalized idea for the game I want to run. It's going to use [REDACTED] as the rules system [System and discussion removed due to no longer wishing to promote that game]. Unlike my previous attempts to get a game going, this one is a) under a time constraint, and b) actually has lines and words set to paper already.

Anyway, the setup is that the characters will be backwoods yokels new come to the big city. Well, the Provincial capital, anyway. Not far from the capital, there is a large mound, similar to Newgrange in Ireland. Of late, there has been an increase in goblin raids, stealing children and livestock. The shepherds in the area claim that they have seen goblin raiding parties coming to and going from the mound in the moonlight. There was a time when the elves made a stronghold of the mound, but they seem to have abandoned it for some unknown reason. (This is, of course, the tentpole megadungeon. It has many secrets, and one overarching mystery: what happened to the elves?) 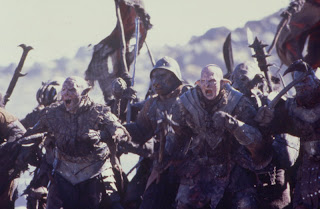 Meanwhile, orc warbands are harrying the villas and towns on the fringes of the Empire. Strange prophets stalk the streets of the cities, proclaiming that the end of the world is coming. Religious cults attract increasing numbers of adherents, threatening the stability of the ancient Tetradic Church, and perhaps hiding darker secrets still. Missionaries of the Fatalist Church of the eastern realms have come to the cities of the Empire, as well, bringing their message of submission to Fate. Certainly, the Empire seems to be in upheaval, with change being the prevailing wind. 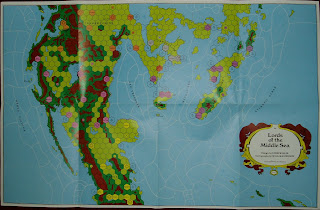 The larger world will either use the Terra Ultima map (also called "Pangaea Proxima") or an older map I have wanted to use for a long time. The older map was inspired by the game Lords of the Middle Sea, which is basically a map of North America with the coastlines set at approximately the 1000' level (though the Middle Sea map also includes the idea that a large section of the Midwest collapses, for reasons due to the fictional background on which the game is based; I wouldn't be using that idea). For instance, in California, the Bay area becomes the mouth of an inland sea, which covers the area of the Valley. If I use that map, then the campaign city will be about where Seattle is in the real world, with the Olympic Peninsula becoming an island off the coast. If it ends up being the Terra Ultima/Pangaea Proxima map, then the city will most likely be located in the region that used to be Hudson Bay, Greenland, and such. 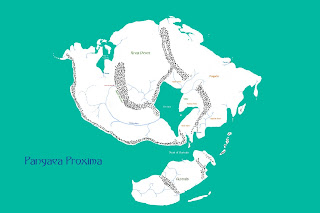 The idea, then, is that the Empire is dying due to being torn apart by both natural and supernatural forces (and other, secret reasons as well). The Emperor is weak and controlled by the Kings of the various provinces. Elves and goblins, orcs and tribesmen all threaten the areas that the Empire cannot directly control through its military forces, and are starting to threaten the areas that it can. The players may be able to, if not stem the tide, at least hold it back for a time. For many people, that time is all that is needed. Heroism can be as simple as making the life of the people better for a time. Maybe the players might even build something that can outlast the fall of an Empire. 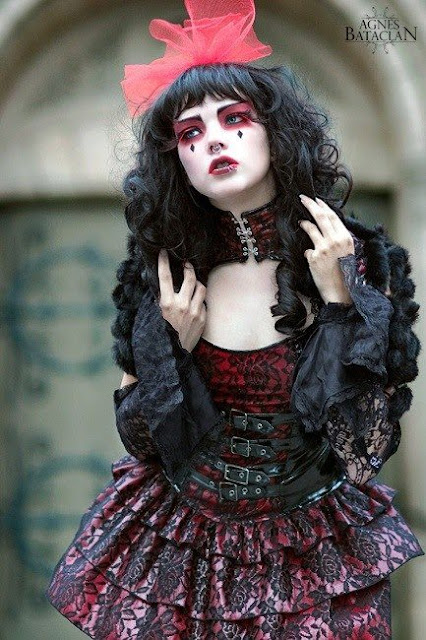 I don't know who the model is, but the picture (as labeled) was taken by London photographer Agnes Bataclan.

Edit: As found by the helpful Hamel™, it appears that the model is Suzie-Q. She sports a number of gothy looks at her Model Mayhem page, as well as a few less gothy ones.

I have a number of things that I'd like to do this year. Some of them are gaming oriented, others are not, but I think that I'll list some of them here.

1) Actually start the D&D game that I've been thinking about and talking about. That means starting to get the dungeon put in "final" form, picking a rule set (and determining house rules, if necessary), and talking with the FLGS about using their tables. Happily, all of those are pretty easily done.

2) Learn to speak Irish, instead of just being able to sort of parse it slowly with a dictionary. I'm starting that tomorrow, so that's a good step forward.

3) Reacquaint myself with programming, and learn DarkBASIC well enough to write a computer game. That will entail, mainly, setting aside time to work through exercises and such from the instructional books I already have. And maybe (ugh) frequenting DarkBASIC-oriented forums. I hope that I don't have to do that last. I hate forums in general, and have had bad experiences with programming forums particularly.

4) Get better with guitar. That is another one that just requires me to set aside time to actually do it. I had planned to do that last year, but didn't get around to it. I need to actually do this.

5) Finish the Top Secret retroclone and publish it in some form.

I have other goals for the year, but these are the ones that I think fit best in this blog.