Speaking of converting Pocket Empires to MegaTraveller, I have done a bit of work toward that which I think could be shared here. I've been working out the probabilities from one set of difficulty numbers to another. For your entertainment and possible value, here are the equivalent target numbers for a roll of 2, 2.5, 3, 4, and 5 dice (as used in Marc Miller's Traveller, aka T4, and also, except for the 2.5D roll, in Traveller5) vs. an average stat of 7:

Note that these don't convert very perfectly to the difficulty levels of other Traveller editions, but then they don't really need to. The point is to get in the same ballpark, not necessarily to hit the exact same odds.

I am assuming the use of the MgT stat modifiers. I haven't decided whether to use those, the original MT ones, or the ones in a set of house rules for MT I found online, where the modifier = (stat/3)-2 rounded up, or a version where the modifier is (stat/3)-1 rounded down. I'm kinda leaning toward that last one.

One of the issues involved with conversion is that I can't just take the given difficulty and port it over directly. Some of the T4 tasks rely on two attributes, which distort the probabilities since attributes are around three to five times more potent in T4 (and also TNE and T5, though that's not really relevant here) than they are in most other editions. So, a T4 task which relies on two attributes would have a target of around 14 or less on average (since the average attribute is a 7), while in MT by the book it would be an average of DM+2. A Routine task would have a 100% chance of succeeding in T4 (2D vs. a target of 14 or less), while it would have an 83% chance in MT (base target 7+, DM+2 = final target 5+ = 83%). So, instead what I need to do is check each task, figure its base odds with average stats and skill-0 if necessary, and convert it from there.

Edit to add: I want to include a link to this article, which is kept at the Internet Archive Wayback Machine. 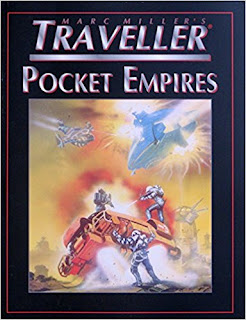 I've been putting this one off mostly because I really wanted to do the subject justice. (Edit to add: Not that I think that I have, but I have been letting the perfect be the enemy of the good enough for too long now.) This is the campaign frame for Traveller that I myself most want to play in, or run if I must. It has been generally unsupported in official Traveller products, with the closest being Adventure 5 Trillion Credit Squadron and the colonial economic model in World Tamer's Handbook (and don't get me wrong, those were good and potentially useful for the subject), but in the fourth edition, Marc Miller's Traveller (also called T4 for short), the supplement Pocket Empires came out.

Oh, this was a joy for me to see. Finally, the game would support campaigns inspired by Dune and other sources involving high-level politics and intrigue. There were rules covering everything from the economic development of worlds to incorporating new worlds into your pocket empire to setting up and finalizing a marriage between members of your noble family and another one. Assassination attempts, espionage, politics on the floor of the Senate, all of these things were covered in the high-level game here.

There were some weaknesses, of course. The basic game had a development turn a full year in length, which could lead to pretty severe discontinuities between the Pocket Empires layer and the roleplaying layer. The rules for voting factions in politics were a little rudimentary, but still serviceable. The military forces abstractions were perhaps a bit too abstract (although this was at least partly remedied with the addition of Imperial Squadrons, which was a major revision and update to T4 standards of Trillion Credit Squadron). The handling of corporations avoided many of the things that give that aspect of play its distinct flavor, with no insider trading, no boardroom politics, no shares changing hands, only what amounts to an abstracted hostile takeover and a few other simple tactics.

Some of the elements of the noble life have been handled over the years. I mentioned a number of resources in the last installment of "Alternate Traveller Campaign Frames", and at least one more has appeared since then in the form of an article titled "The Influence Game", posted over at Wayhaven Traveller, which could be used to fix the lackluster politics rules in Pocket Empires. 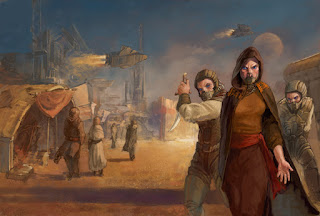 That really just leaves the problems of the speed of play and the generic, unfulfilling corporation rules. The corporations could be handled by looking at the rules on high finance and setting up and running corporations, getting them onto publicly traded markets, and so on that are found in GURPS Traveller: Far Trader, but it still misses the whole corporate struggle aspect as the authors left out the dirty tricks from the Stock Exchange floor. For that, we have to look further afield, to a supplement for the game TORG called Nippon Tech. That included a whole sequence of corporate warfare and a character type, the "Mega-corporation CEO", that could use it. Issuing junk bonds, taking advantage of insider trading, and most importantly the results of adventuring such as sabotage or stolen information are all embedded into the game as warfare against the opponents happens on the trading floor as much as in a firefight.

A lot of these different layers include the idea of a turn length of a week to a month. It shouldn't be hard to incorporate that into the main Pocket Empires sequence. That would fit everything more tightly to the roleplaying layer of the campaign, which effectively has a "turn length" of one week, since that's how often Patron and Rumor checks are made, how long a Jump takes, and so on.

All of this is important to me, as I am (slowly) working to convert Pocket Empires to MegaTraveller standards. I think that edition is the easiest to convert to any of the various other editions out there, so that it could be easily used with CT, CE, MgT, T5, or whatever. I intend to flesh out the corporate section and the politics especially, but also spend some more time on the military elements. Integrating it more completely with the roleplaying is my priority, of course. Setting out a specific method of generating the Noble House and its starting assets will be important too, as will working out ways to incorporate the players into the House.