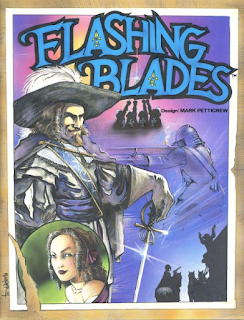 Fantasy Games Unlimited was notorious for publishing excessively complex games like Chivalry & Sorcery, Aftermath!, or Space Opera, but in fact they just as frequently published games of normal complexity, like Villains & Vigilantes or Psi-World. Some of their games, like Bunnies & Burrows, were on the much less complex side of the hobby. And that is where we find ourselves with the swashbuckling game, Flashing Blades.
Character creation is fairly straightforward, with a few stats each rolled on 3d6, a number of figured stats including a hit point pool, the choice of several character backgrounds that give varying access to skills, giving different skills a cost of one, two, or three points each, and a number of skill points to pick up those skills. In addition, a character can learn how to fight in various ways, from picking up the skill on the mean streets to formal instruction in a fencing salle. Finally, the character can have any of a number of advantages or be burdened with a secret that gives story hooks to the character.
Non-combat skills are easy to use, simply rolling against one of the character's stats if the skill is possessed, half the stat if it isn't, and getting bonuses for a couple of levels of increasing mastery. In addition, mastery of a skill should cause the Referee to call for rolls less often, only for situations of increased difficulty.
Combat isn't much more difficult, being a process of figuring the chance to hit on a d20, rolling for hit location by picking a target, rolling 2d20 and using the result that is closest to the target location, and doing damage that is reduced by armor rating.
But a swashbuckling game would be remiss if it didn't provide a way to rise in society, and in some ways the heart of the game is found in the social status and careers. Characters start with a social status based on their background and possibly their advantages if those provide them with a position at the start of the game. They may use their skills and background to enter into any of various careers, whether in the army, the royal bureaucracy, the Church, the banking system, or a number of other possibilities. Each career starts with a low-level position, such as a minor bureaucrat, law student, or priest, then provides opportunities for advancement as the game progresses, potentially advancing as far as Pope of the Church! Of course, most characters will not make it so far in their careers, but even a Town Mayor or Provincial Tax Collector has significant clout. There are also minor careers that can be pursued, such as rising as an official within a Gentlemen's Club. The most active characters might even pursue careers in several directions. Holding a number of positions can increase the character's social rank, after all.
Most of the supplementary materials for the game simply provided some adventures to undertake, but High Seas in particular expanded the game by providing for life in the Caribbean instead of France, and opened the possibility of playing a pirate, with information on how that sort of a career could be pursued.
Designer Mark Pettigrew was only 19 years old when the game was published in 1984, but its clean design and sophisticated approach to a lifetime career speaks to a solid understanding of how those could work in a gaming environment.
In the end, it's an excellent game. You can still buy it in print or PDF. PDFs are available at DTRPG, while the print game can be ordered from Fantasy Games Unlimited directly. I do not get any kickbacks or anything from those links, I am only providing them for your convenience. 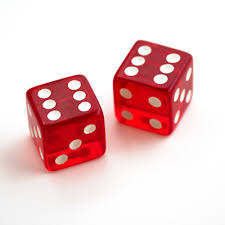 A long-time project of mine has been to update the old RPG Fantasy Wargaming, a game which was never properly developed or even well-edited. Different authors had different chapters, and those portions of the game weren't very well integrated into a cohesive whole. In addition, the people involved had very little collective experience at game design, though of course some had more than others. Further, the game was based on very early designs like D&D and Tunnels & Trolls and so had few models to examine to provide the best ways of approaching different parts of the game.
Even with all of those flaws, though, some of the ideas incorporated into the game verged on brilliant. I still haven't seen religion, especially polytheistic religion, handled quite as well (I'm  not sure that there's any other game which included the idea of appealing to a Power to intervene on the appellant's behalf with another Power and make it meaningful), and magic drew on then-cutting-edge ideas current in the so-called "Chaos Magick" movement that was happening at the time in England. It wouldn't be until Mage: The Ascension was published a dozen years later that similar ideas would be seen again in game design.
As I sit down to turn my notes into a playable game, I find myself thinking about things that I haven't seen discussed in game design before. For example, I am thinking about the relationship of the player, the character, and the setting. Some games treat the character as a mere extension of the player's desires, allowing an absolute control and decoupling the character from any setting-based relationships. This is a reflection of the purely individualist conception of a person that prevails in a lot of Western cultural contexts, but most especially as a very American attitude toward the person. I want to encourage a more social understanding of the character within the setting, so I am looking to models like Pendragon and Lace & Steel to examine elements of a character that constrain the omnipotent control by a player over the character usually assumed in RPGs. Factors like emotions, attitudes, and so on should be included in the game I am conceiving. These ideas were included in a rough form in Fantasy Wargaming, of course, in the systems related to Temptations and the resisting thereof, in the Leadership and Social Class rules, and so on.
As I'm conceiving the metaphysics of the game, as it were, I see the player as representing the soul, giving purpose and direction to the character. The character, though, has a history within the game setting, and this affects the attitudes and assumptions of the character that might run counter to or align with the will of the player. Fears, desires, hatreds, and devotions mix with personality traits like Honesty or Generosity to influence the decisions the player might make, for good or ill. Getting those personality elements to align with the player's preferences is part of the psychological work that the character and player might embark upon. In addition, social traits like Social Class and Leadership value have their effects on how the player approaches the game as well.
In Fantasy Wargaming, the personality traits were mostly expressed as the negative pole of the trait, so that they were described as Greed, Selfishness, and Lust (there's also Bravery, but that served as both fearlessness and anger). I am reversing that, so that those three traits are Temperance, Generosity, and Chastity, respectively, and I'm adding two others, Honesty and Stability, while the final personality trait, Bravery, I am leaving largely as-is. Stability is sort of the odd man out here, since it isn't involved with many Temptations, but it does allow the player to choose to temper the excesses of the character's passionate emotional reactions. I might choose to make it a regular attribute of the character instead.
In regard to more prosaic game design issues, I am still struggling with whether I should retain the odds tables of FW or re-figure things so that the game produces simple target numbers to roll on a d20. I am almost certainly going to replace "hit point" style damage pools with descriptive injuries, simply because that is a major aesthetic preference of mine. I am certainly going to keep the character levels approach, divided into the three types of Combat & Adventuring, Magical, and Religious, but instead of 1000 experience points of the appropriate type per level, it'll be 1000 for first level, doubling for every level after. That does mean that most characters won't be rising much above 6th or 7th level over their whole adventuring career, and rising above 14th level will be nearly impossible, but that's well within the parameters I want to see anyway. It also means that players who have to start a new character won't be really left that far behind their fellows and can catch almost all the way up fairly quickly.
Anyway, just some initial thinking about how to approach the game. In some ways, this is also related to JB's thoughts on fudging dice rolls, in the sense that we are both exploring what it means to be playing a game as opposed to just playing around. I'm not, of course, saying that JB would necessarily agree with my thinking here, only that we seem to be exploring the same questions of purpose.