Setting Notes - Organizing My Thoughts On The World Of Hearth 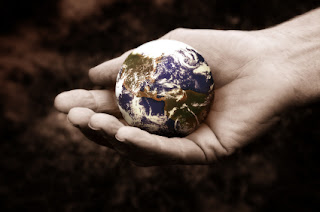 I've been making maps and writing descriptions toward a fantasy setting to use for AD&D1E (yeah, I know, I keep talking about doing this and then never actually get to the part where I run it - I'm just really particular about my "vision", which makes me a pretentious twit, I realize), to be called Hearth, in keeping with the long tradition of giving worlds names that are similar to Earth. The problem I'm having is that I am really unfocused. I know the things I want, but when I write it, they aren't coming together. So, here's where I'm going to start trying to hammer out exactly what I am wanting to do.

First, there are some things I don't want to see in the world. This isn't going to be the sixguns & sorcery setting I also want to run, so guns are a thing I don't want to see. I don't want player nonhuman races - there may be elves and such, but not as playable races. Hardly as "races" in the sense of intelligent animals. More like spirits with bodies, maybe. Fey races with fey motivations. Goblins with fairer forms. Not to mention the goblins. I don't want clerics, or any proof of divinity in the world. All divine action should be "explainable" in terms of magic or such. Which doesn't mean that there won't be reasons to sacrifice at a roadside shrine, or to join the organized churches. Just that the sort of living saint that is embodied by clerics (or paladins, or druids) won't be in the setting. This also means no healing magic. Speaking of which, alignments will be discarded as the nonsense that they are, in favor of the "For King and Country" system found in an issue of Dragon magazine (so, with clerics and cleric spells gone, the only reference to alignment really left is the M-U's "Protection from Evil" spell, which will be redefined as "Protection from Spirit Beings", meaning anything native to other planes of existence). 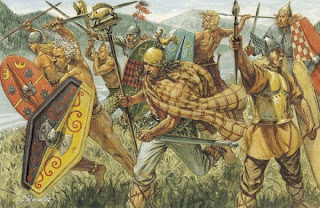 OK, on to things that I do want. I want a group of barbarians who live like my understanding of the pre-Christian Irish or pre-Roman Gauls (or maybe a little like Orlanthi from Glorantha), but I want them on the fringes of the setting. I want the PCs to come from a relatively barbaric area I call "Ablashia", which is inspired by some concepts from an obscure game called Legendary Lives by Joe and Kathleen Williams. They will be coming to an empire of sorcerer-kings called the Paynim Empire, to one of the cities on the fringe of the empire. The Paynim include some periphery states with vampire- and pirate-kings (the latter very much like Pirates of the Caribbean, but without guns and cannon - the ideas there are inspired by the volume of Thieves' Guild dedicated to pirates) 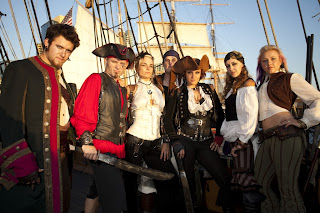 instead, and one of the sorcerer-kings is a lich necromancer who actually does have his people's best interests at heart, using undead to free his people from servitude. I want to draw some concepts from bad sword & sorcery films like The Warrior and the Sorceress, and include an order of fighting monks (not Monks, more like Paladins who are redesigned to better fit the cosmology of the setting; maybe I'll even call them Homeracs) whose religion was crushed and scattered, so they wander the world, dispensing justice according to their code and helping the weak against the strong who want to exploit them. I want a people who have made alliance with dragons, worshiping them and fighting at their side, and even from their backs. I want demon cults, but I want it so that not all demons are inimical to humanity. I want werewolf warbands in the deep woods and assassin cults on distant mountaintops. I want steppe nomads whose elite warriors ride into battle on the backs of bulls, and who make alliance with wandering bands of Minotaurs. I want Elves who are sadly watching the ancient forests fading away, and who are fading with them (their leaders being something like Arafel from The Dreamstone and The Tree of Swords and Jewels, almost gods themselves). I want Dwarves who monomaniacally maintain the world-machine in secret tunnels at the heart of the mountains. I want Goblins who are fairy creatures that steal children and hold terrible markets in the middle of the night.

So, the nonhuman, non-fairy/giant, non-undead, intelligent races. I want Minotaurs, obviously. I also want Githyanki and Githzerai, Mind Flayers, Kzaddich and Tsalakians, Lew Pulsipher's Timelords (Dragon 65), Artificers of Yothri and their Amphorons, the array of non-goblin humanoids (Orcs, Kobolds, Gnolls, Flinds, Ogres, Ogrillons, mainly), Kuo-toa, Locathah, Sahuagin, Beholders, Centaurs, Tabaxi, Aarakocra, Grimlocks, Lizardmen, Bullywugs, Yuan Ti, Galeb Duhr, Treants, Aboleths, Doppelgangers, Harpies, Merfolk, Neo-Otyughs and Otyughs, Ropers, Su-monsters, Troglodytes, Tritons, Neogi and Umber Hulks, Mi-go, Trolls, Thugtoads and Todawan Masters, Glurm (Zen Frogs), Crabmen, Dertesha, Draug, Formians, Ratlings, Mogura-jin, and Maun-Ge. This, as I said, does not include fairy and giant races, the undead, or entities native to other planes of existence (although, perhaps some come from other worlds). This is going to be the hardest to deal with, since as natural creatures they have to exist in places on the world, and I have to work out how they fit with the human nations. Some of them (Githyanki and Githzerai, Kzaddich and Tsalakians, Artificers of Yothri, Mi-go) live in other planes of existence, even though they do not originate there, or on other worlds, so those considerations are not so important. Similarly, a number of these races live under the sea or under the surface of the world, so they just need to be placed generally. But the humanoids, the Draug, and others have their own nations that need to be considered.

Religion is going to be twofold. That is, there are two types of religion: the Churches and the pagan gods (which include demons). The Churches will have a hierarchy that the PCs could get involved in. Those ideas will be similar to the way religion is handled in Flashing Blades. There might also be incidents of divine intervention in rare instances. The pagan gods will have shrines where they can receive sacrifices. They will be individual, powerful beings existing in a particular place. That is, there might be a "Zeus" (Zeus will probably not actually be one of the pagan gods in the setting) who lives at the shrine in Highgate, while another "Zeus" lives at the temple in Payn. The two, Zeus of Highgate and Zeus of Payn, are not the same entity, and don't share knowledge between each incarnation, though a person who has spent a lot of time learning about the "Zeus type" would have an advantage in knowing how to approach a new Zeus encountered at a different temple/shrine. There might, additionally, be slight differences between the two incarnations. The only real difference between the pagan gods and the demons is that demons only exist in one place at a time - there is only one Demogorgon in all the world, who will only be able to show up to one summoner at a time (well, also most of the demons do not necessarily have humanity's best interests at heart). In this sense, the Titans (for instance) are a type of demon. The same could be said for any number of other powerful entities (Bahamut and Tiamat, for example).

There are several competing Churches in the setting. I've written some versions of them on this blog before. There is the Tetradic Church which worships the four Elemental Gods, whose influence is transmitted from the Celestial World to the mundane world through the mediation of the twelve Zodiacal Beasts (the Church is firm that there is no truth to the heretical claims of a secret thirteenth Zodiacal Beast), each of whom has three Decanic Solars. Each Solar has seven Planetars through which the elemental forces are transmitted to the world. This one will be organized mostly like medieval Christianity, with a few significant differences. I'm thinking that they should have an equivalent to the cultus of Saints, but I'm not sure yet how I want to handle that.

Next up is the Fatalist Church, who worship the Lady of Fate, the Weaving Goddess. They have a fairly rigid code of justice which governs them. I base them loosely on medieval Islam, though, so they aren't fundamentalist about things.

There is the Path of the Veil, which is a Church whose holy orders are composed of Monks and Illusionists. They believe that the world is a veil of illusion pulled over the eyes of the inhabitants, who are themselves illusions. This will be a lot like Buddhism in organization. I may have it comprise several independent Churches, similar to the way that Buddhism has everything from Tibetan to Zen forms.

I'm not sure if there will be a Church of the One and the Prime, which would be worshipers of the Modrons. If I do, it will be the most rigid and fundamentalist of the Churches. A place for everyone and everyone in their place.

I don't yet know what the religion of the Homeracs (or whatever I end up calling the reskinned Paladins) will be like yet.

I started out making a huge map of the whole continent - a large affair nearly 5000 miles across and over 3000 north to south. Then I realized: I don't need that much space to start. Canning that large map will actually make the placement of the nonhumans a lot easier, since I can just add area when I get around to them. I still think that I should have a general idea of the layout of the continent, but it will be easier to make a rough map that is penciled in (subject to changes) than to set things down in stone (or ink) right now. That kinda makes me a little sad, since I'd like to have the detail of the World of Greyhawk right off the bat, with the populations and troop dispositions roughed out, but I can live with the more immediate necessities.

If you've gotten this far, I am impressed! Thank you for reading, and I would love to hear your thoughts.