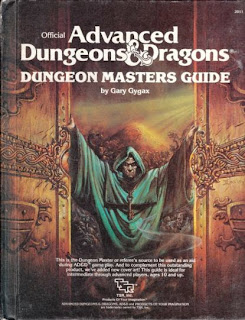 People have deeply analyzed AD&D, especially the 1st edition, as part of the whole "OSR" project. Some detractors have characterized it as a "Rabbinical" exercise in excessively close reading, as though there were no point to trying to figure out exactly what the intentions were of old wargaming hands, especially the hands of E. Gary Gygax, in creating the rules that they did. Certainly, we know that a lot of how the game was played in those early days was actually developed by kids reading loosely and then adapting the ideas to their own needs. As a result, a lot of rules that didn't seem immediately useful were dropped by the wayside, and later editions would adapt those streamlined approaches.

But we can assume that the writers, in this case Gygax, had a very specific idea of how the game was put together, developed after years of play with hundreds of players. And it might be, the OSR thinking went, that we could find useful things that got missed. And the OSR did, indeed, find useful things in their deep reading.

But I think I've found something that got overlooked in the OSR project, too.

So, everyone knows by now that AD&D, like D&D before it, relied on an abstraction of combat. That's the reasoning behind the minute-long combat rounds, the nature of hit points, and a number of other factors that are taken for granted. It was a time when there was no need for complicated "attacks of opportunity" rules or detailed maneuvers and combat techniques because all of that was simply assumed and abstracted into some simple rolls. Good enough, though some early editions pulled the combat round back to representing 10 seconds, which is still long enough to keep combat abstract, but also conforms better to the intuition that a roll "to hit" in combat represents an actual attempt to hit the opponent. Of course, we know that the original D&D and early AD&D rules used the minute-long rounds for a number of reasons, ranging from the round's origin in mass-combat miniatures rules, the desire to recreate swashbuckling adventure movie swordfighting, with its scenery-chewing acrobatic movement all over the set and such, and most importantly with the desire to have combat be meaningful on the exploration scale that covered the main "game loop" of the dungeon crawl. A fight, that perspective holds, should be capable of taking up a full turn or two of exploration movement and action. Since a combat is unlikely to last more than 10 or 15 rounds even in most extreme cases, it is helpful to make those rounds last 10 or 15 minutes.

All of this implies a very abstract system. There should be no need to model movement within the fight, as that movement would be assumed in the context of the melee as a whole. Movement should only be meaningful in the context of moving into melee in the first place, from one melee to another, or fleeing from one. Thus, we see charge rules, pursuit rules, and so on.

Fine, we see that combat was intended to be abstract. We also see some interesting approaches to modeling combat so that players have to make tactical decisions. Missile weapons, famously, fired into a melee will have a chance of hitting any character involved in that melee, and a melee is specifically defined as everyone within 10 feet of anyone involved in that melee.

What nobody seems to have noticed, though, is the rule on page 70 of the 1st edition Dungeon Masters Guide, "Who Attacks Whom". This extends the abstract nature of the combat system, assuming that characters are moving about, striking at opponents as the opportunity presents itself. We see that this is treated similarly to firing into melee, except that a character can't accidentally attack someone on their own side:

As with missile fire, it is generally not possible to select a specific opponent in a mass melee. If this is the case, simply use some random number generation to find out which attacks are upon which opponents, remembering that only a certain number of attacks can usually be made upon one opponent. If characters or similar intelligent creatures are able to single out an opponent or opponents, then the concerned figures will remain locked in melee until one side is dead or opts to attempt to break off the combat. If there are unengaged opponents, they will move to melee the unengaged enemy. If the now-unengaged figures desire to assist others of their party, they will have to proceed to the area in which their fellows are engaged, using the movement rates already expressed.

This changes a lot in the way combat in the game is played. Players can no longer simply team up on one target at a time, moving on to the next only as each one is eliminated. Picking out the thief for special attention becomes a matter for Referee/DM rulings* rather than something just simply done at will. In our experience, too, it helps speed up combat in play even more as players don't really have to deeply consider who is best to spend their fighting energies on, instead just attacking whoever the dice say is the available target for that attack.

Anyway, if you're playing 1st edition and trying to use the rules as written to whatever degree, consider having characters in melee target opponents randomly. It changes things a little, and gives more of a feel, in my opinion, of the energetic combats of the films that inspired D&D combat, like Robin Hood or Ivanhoe.

*One useful area for rulings in a combat might be opponents held in place by a spell effect or a trap.