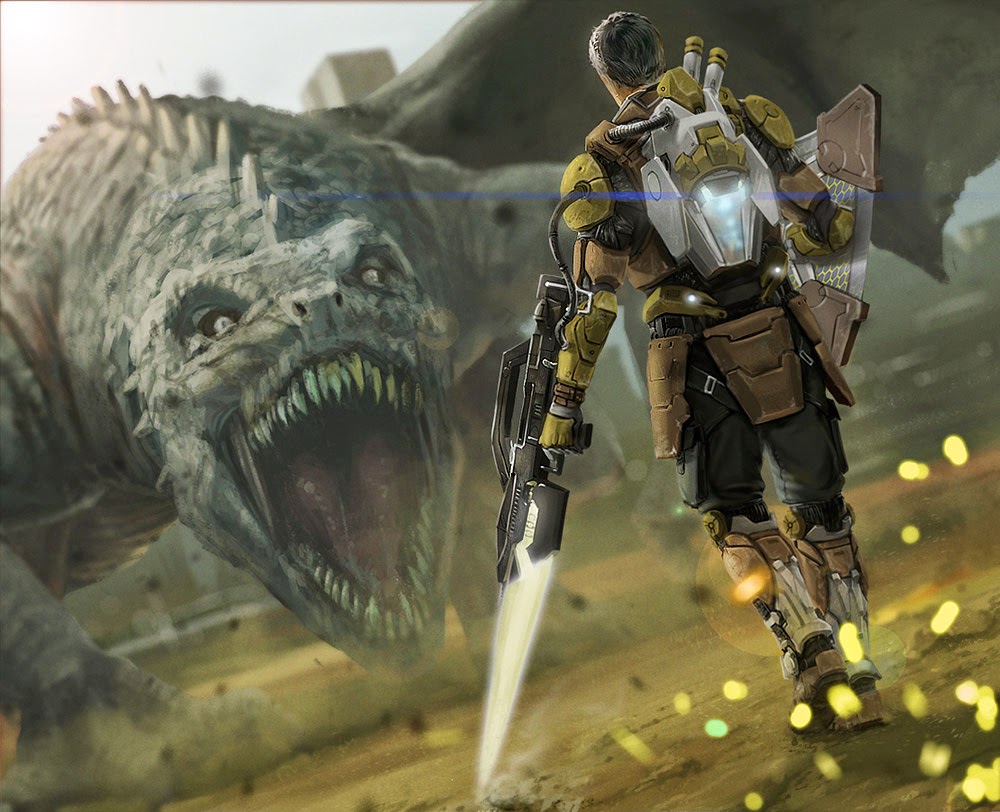 One of the campaigns that runs around in my head, that I'd like to run or better still play in, is what I tentatively call "Flanaess Sector". This is AD&D as a science fiction/science fantasy setting, though running it as a nearly hard-SF game (as "hard" as Traveller, say) could be very interesting indeed. Psionics and the Psionicist replace magic, technology is used instead of magic items, and the alien races are drawn from the more outré AD&D monsters. What it would need is a collection of new character classes, new technological items, starship rules, and perhaps trade and commerce rules (to handle Traveller style merchant campaigns, which are wonderfully flexible).

The aliens are mainly what I've given my thought to, little though it has been so far. I imagine an empire of Illithids, Ropers (which I imagine as being the first race that the Illithids were parasitic upon, drawing on the Urophion from The Illithiad) in a small sphere of resistance to the Illithids, Grell (in the Colonial Grell variety from Spelljammer), Neo-Otyugh, Neogi from Spelljammer with their Umber Hulk servants, maybe Xorn treated as a silicon-based life form, Flumphs, Ixitxachitl (suitably modified to not be based around Clerics, though they would make a great evil theocracy), Aboleths, and maybe a few others. I also greatly enjoy the Tyranids from Warhammer 40,000, so maybe those too. I don't have much love for humanoid aliens, but who knows? Maybe there are orcs or tabaxi among the stars.

The character classes might be based on the ones in Stars Without Number or maybe even Starships & Spacemen 2nd Edition, but rewritten to fit better with AD&D rather than B/X. Or, more likely, a set of interesting classes could be written from nearly whole cloth. I envision, in addition to the Psionicist I mentioned, Soldier, Pilot, Engineer (or Technician), maybe Merchant, Conman, and a few others. It being AD&D, there would be room for quite a few character class options. The classes in the old WotC Star Wars game might not be a bad set of choices.

Starships could be handled with any of a variety of systems. The aforementioned Starships & Spacemen and Stars Without Number are the obvious choices, but Terminal Space or some other OD&D-based SF supplement would be workable, as well. For that matter, Traveller's starships would work well, too. As an alternative, perhaps a system of Gates, similar to the ones in the Judges' Guild "Portals" trilogy, could connect the worlds. Perhaps not, though, as starships are half the reason to play SF instead of fantasy.

Here's a list of all the intelligent monsters from AD&D that I think would make good aliens: Aboleths, Beholders (but I don't want to use them, although there is a whole society built around them, especially in Spelljammer), Dopplegangers, Dragons (maybe, but if so, then especially the Blue or Black varieties), Flumphs, Formians (centaur-ants), Galeb Duhr (maybe, they're perhaps a little "magicky"), Grell (Colonial), Intellect Devourers, Ixitxachitl, Lizard Men, Mind Flayers, Myconids (there's also an ecology of mobile fungi for their homeworld, not to mention the special molds and slimes could be from their native environment, too), Neo-Otyughs, Ropers, Thri-kreen (mantis warriors), Treants (should they keep their ability to animate trees? I don't know; probably not, which is also a way to "fix" Galeb Duhr), Umber Hulks, and Xorn. Mi-go (if the DM has the first print Deities and Demigods) would fit perfectly into the setting.

As I said, I would prefer not using any humanoids (other than Lizard Men, Dopplegangers, and Myconids, perhaps), but if I did I would stick to the less common ones like Crabmen, Aarakocra (bird-men), Tabaxi (cat-men), Banderlogs, Grippli, and the like. Xill could be interesting, though they should probably have their ethereal powers and nature removed.

It might be interesting to include a "transcended" species that manifests as the faery creatures like Sprites, Pixies, and the like (there's a useful "ruling caste" for them to be found in Adventures Dark and Deep called Faeries). There's a race like that in the Star Fleet Universe, in the Omega Octant, called the Loriyill. Their starships have semi-magical effects like space fireballs and such.

Anyway, it seems like it could be a lot of fun, and leveraging the more science fiction/science fantasy elements of D&D seems like a good idea to me.