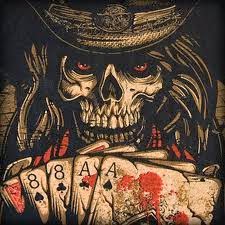 Ever since Gary Gygax included a section on converting Boot Hill to use with AD&D in the DMG under that title, I have been attracted to the idea of a fantasy setting with revolvers instead of broadswords, boomtowns, stagecoaches, stetsons, and such. Heck, I remember reading an issue of The Avengers where they, along with Moondragon, pursued Kang the Conqueror back to the Old West (and they teamed up with the Two-Gun Kid), so all sorts of Marvel-style magic and whatnot got going in the setting, to say nothing of Jonah Hex. I've come closer and closer to what I want to do over the years. The inclusion of a variation of the Spirit Magic system from GURPS Voodoo: The Shadow War in the last edition of GURPS Old West under the 3E rules (to cover Native American shamanism in game terms) was enlightening. Until recently, though, I had thought of it as the American West. Suddenly, a couple years back while re-reading The Lord of the Rings for the umpteenth time, I realized that I could create a separate fantasy world, with only the vaguest references to the real world, for the concept. I'd been told that I should read Stephen King's "Dark Tower" series in relation to the idea, too, so I picked those up recently and enjoyed them greatly (I liked the stories of Roland's younger days with his first ka-tet the better of the two periods that King chronicles, but both were quite excellent), but King's parallel universes aren't really what I want to explore with this. Which is not to say that I wouldn't play in a game someone was running set in Mid-World, because I sure would!

In researching for this blog entry, I've learned about a few other such settings, such as Teara Adan, and of course Castle Falkenstein had a supplement titled Sixguns & Sorcery, but they aren't quite what I'm looking to do. Specifically, I am not interested in making it a steampunk setting. It is decidedly fantasy, not science fiction, even of the Victorian style. Deadlands is pretty close, but a little further over-the-top than I want, plus it is tied to the historical Old West. As with Mid-World, if someone else were running any of these, I'd be up for it. 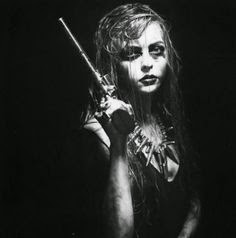 So here's what I've got going. I am going to run a solo game (using Mythic Game Master Emulator and GURPS 4E). Right now, I don't know much detail about the world other than the name of one county (Tioga County) located on the Great Plain. I've been calling it, alternately, the Sixguns & Sorcery game and the Tioga County game. Neither of those are ideal, but I haven't figured out what I want to call it for sure yet. I know that, someday, I will have characters in Tioga County who will work through a scenario based on the initial conditions, in a general sense, of the real-world Lincoln County War (famous for being the main exploits of Billy the Kid, and subject of movies from Chisum to Young Guns, and many others besides). I think that scenario will include the characters I call the Shootist and the Witch, David McArthur and Lizzie Hanchard, who I introduced on Friday with representative pictures, but I can't know that for certain, as they might die in a scenario before then. A lot of the details of the world will be generated as part of the Mythic GME process. In any case, it won't start in Tioga County or be centered around that area until the Tioga County War scenario gets going, and there's that issue of the Castle Falkenstein supplement. Maybe I should just stick with Fantasy West.

I do know a couple of things, I guess. I know that there are spirits and gods, known collectively as the fatas, but I only have the vaguest ideas about who exactly they are. There are something like traveling revivalist preachers. I know that technology is not much advanced beyond what existed in North America in 1860-70 or so, but there are no steam engines and so no trains. It's a world made almost entirely by hand. I'm pretty sure that there is a network of telegraph wires, though, run by animal- or water-powered generators. I know that metallic cartridge ammunition exists, but costs ten times as much as would be expected due to the difficulties of hand manufacture - most people rely on cap and ball with paper cartridges for ease of loading, and might even carry a bullet mold sized for their specific weapon. I know that there are semi-nomadic tribes living in the wilderness surrounding the towns, who don't have a lot of metallurgy (it's hard to carry a forge around with you), but trade for such items. I am not playing with the racism of the real-world Old West, so these tribes somewhat resemble the "barbarians" of the Hârn setting. I do have a vague idea that there are different cultures: in addition to the towns and the "barbarian" tribes, there are something like Mexicans in the south, some pseudo-Mormons in the mountain west, more civilized kingdoms (I think? They might be republics) in the east and the southern part of the west coast, pirate kingdoms along the southern coast, maybe some others. So, I guess I have a vague outline of a continent somewhat like North America in mind, but it's subject to change.

For rules, I plan to use the "Path/Book Magic" system found in GURPS Thaumatology, because I like it a lot. I want to use some of the more involved systems like Technical Grappling and "The Last Gasp", so that I can learn to use them more proficiently. Running solo means that I can spend as much time as I like figuring out what to use and when - I don't have to worry about pacing at the table. I'll definitely be using Social Engineering for personal interactions, which should make the solo game more manageable, or something. I'm trying to decide on whether I want to use Divine Intervention. I'm leaning to "no", though. There is definitely alchemy, which is mostly known by traveling snake oil salesmen (not all of whom are legitimate alchemists) and the occasional drugstore chemist in the larger towns. Some of the more adventurer-ready potions are pretty rare, though, as they tend to focus on healing potions of various kinds (and the occasional love potion), which is what they can sell to the average person. GURPS Martial Arts will be in use, though I am unsure as yet how prevalent various fighting styles will be. I plan to use the detailed gunfighting material from Tactical Shooting, and perhaps some of the more benign systems from Gun Fu. Some "cinematic" material is available, such as Gunslinger and Trained by a Master, but otherwise the setting is intended to be fairly gritty, with blood loss rules and other detailed injury material in effect. If it ever comes to it, I plan to use the "Tactical Mass Combat" variant. I dislike narrative rules like Signature Gear and the like, so those are not in effect. For timed advantages like Luck, I'll treat each "scene" under Mythic GME as an hour of play, regardless of how long it actually takes, and allow the characters an appropriate number of uses per scene. By default, NPCs will have Pacifism (Reluctant Killer) unless they have a reason not to have it, such as an alternative mental disadvantage representing some type of sociopathy or the like, or a (cheap, maybe 5 points) unusual background. Chances are I'll build these ideas into many of my PCs, too. Certainly, Lizzie Hanchard is a Reluctant Killer, though David McArthur has disadvantages representing his difficulties sleeping well (Insomnia and Light Sleeper) instead.

Speaking of "The Last Gasp", I've made a small change to it, as the fatigue recovery rates are just too punishing as far as I can see. They don't interact well with a number of the original systems, such as hiking. That's easily remedied, though, and can still keep the intent of the original by moving each category down a level, as it were, and making the quickest category based on 120 minutes. (If you don't know what I'm talking about, don't worry too much about it. It's a way to make fatigue a serious expenditure, which complements the Action Point system of short-term fatigue that the article introduces, rather than the original system which allows full recovery of all fatigue in a couple of hours, and the fatigue of most fights in 10 or 20 minutes.)

Let me see… I know that there are werewolves running through the woods (probably not like the ones in Ginger Snaps Back, but that is definitely inspirational material). Snolligosters, Whirling Whimpuses, and of course Jackalopes are around and about, among other creatures of North American legend. There may be dragons, I am not sure, or maybe dinosaurs. Or both.

Some of the specific movies that inspire the setting include (but obviously this isn't all):

Dead Man
Django
Django Kill! If You Live, Shoot!
Eyes of Fire
Ginger Snaps Back
The Good, the Bad, and the Ugly
High Plains Drifter
I am Sartana, Trade Your Guns for a Coffin
If You Meet Sartana, Pray for Your Death
The Magnificent Seven
Pale Rider
The Resurrectionist (an obscure one, to be sure)
Romasanta (aka Werewolf Hunter)
The Strangers Gundown
They Call Me Trinity
El Topo
Unforgiven
The Valley of Gwangi

I want to add The Phantom Empire, but I've never yet had a chance to see it.