A few years ago, I published a few articles on a world I called the Middle Sea World. You can find most or all of the posts at the Middle Sea tag here. Anyway, I sort of let it fall aside as I was doing too much worldbuilding for the original idea, in part because I had no group to play with at the time.

A few days ago, as I picked up my copy of Lords of the Middle Sea (the original inspiration for the map, if not the setting), it occurred to me that the setting of that wargame was pretty interesting in itself. Also, it makes a thematic parallel to the Sundaland setting I mentioned in the last post. Sundaland is set in the distant past, when the sea levels were lower than today, while the Middle Sea is set in the future with sea levels that are much higher.

As a quick aside, Lords of the Middle Sea was inspired by a story titled "The Great Nebraska Sea", the text of which can be found here along with a map that was inspired by the story. Obviously, there are differences between the inspiration and the Chaosium wargame.

Anyway, in the game there are six factions, four of which are player positions. These are the resurgent Aztec empire of the Nahuas; the remains of Catholic Mexico, pushed further to the North; the horse-riding nomads of Transwyoming stretching from the Pacific Northwest to the peninsula above the Nebraska Sea; the seafaring, warlike petty kingdoms of the Wardoms of Appalach, recently united under a single king; the small (and neutral as regards the players) nation of Centerline from the land formerly in southern Wisconsin up into the former Minnesota; and the great seagoing Arks of the Salvar clans based out of islands that were once San Francisco and the Ouachita Mountains, also neutral in regard to the players. Each faction has a different advantage: the Nahuas have large cities and so can recruit more troops from them, the Transwyoming peoples can maintain larger forces of light cavalry, the Wardoms of Appalach have larger numbers of warships available and more access to large, submerged cities to ransack for lost technology if they can hire the Salvar Arks, and Mexico—holding onto the remains of North America's helium reserves—has not only the only source for building dirigible airships, but also the single largest source of victory points at the very start of the game.

Each of the player factions also has a King, who can travel either with a small military retinue of around 600 elite soldiers or incognito. Each has its benefits and hazards, and the King can change from one to the other in various circumstances. As Kings gain experience by performing quests, winning battles, and so forth, they can "level up" to become a Hero-King or even a Sorcerer-King. Hero-Kings may choose one special ability from a list, while Sorcerer-Kings can use any ability on the list—but only one per turn. Quests can also lead to lost Libraries, which give special benefits to the faction that possesses one. Similarly, salvaging lost technology provides benefits ranging from permanent increases to all of a faction's combat statistics through an increase in the faction's treasury and other bonuses.

For me, I don't much like the Nebraska Sea part of the setting. There is the wonderful image of the Godwall, a thousand-foot cliff along the coast where the land collapsed to create the sea, but it's not enough to save the idea for me. I like the simple plains sloping gently up out of the Middle Sea toward the Rockies. It gives me the option to place more factions/kingdoms too.

I can combine this with some of the deindustrialized future ideas I have, too. Drawing on the concept from GURPS After the End where higher technology exists but is increasingly more expensive, while a Renaissance level of tech is more easily sustainable, that lets me include even more exotic ideas like enormously expensive alcohol-fueled aircraft—maybe biplanes!—mounting machine guns fighting helium-filled dirigibles carrying smoothbore guns and sailing ships armed with anti-air black powder rockets. Characters will probably carry flintlock or matchlock guns, with swords as sidearms to meet opponents who survive the gun volley, though some might spring for the expense of a black powder caplock revolver instead, or perhaps even take on the continuing expense of cartridge ammunition.

After spending some time healing up, the characters started to question the spirit of the former Town Marshall, learning that Joe's father was the person in town who was most involved with conjuring spirits but little else. After deciding to go out to Joe's farm, they were distracted by a disturbance at the blacksmith's down the street. Arriving and asking for information from the Deputy Marshalls there, they learned that the blacksmith had been disemboweled and ritualistically mutilated.

Finally getting out to Joe's farm, the characters found themselves walking into a siege. Quickly dispatching four of the ranch hands, they got into Joe's house and assessed the situation, determining that at least ten more ranch hands had surrounded the house. At this point, we ran out of time.

I like sword & sorcery fiction. A lot of the early works drew on the occult history outlined by Madame Blavatsky's Theosophy movement. This is especially true of the proto-sword & sorcery fiction of Edgar Rice Burroughs. The correspondences between the races and structures of Barsoom and the speculations of Theosophy are complete. H.P. Lovecraft derived many of the concepts of his weird fiction from the same source, and Robert E. Howard—arguably the originator of sword & sorcery—drew on the material both directly and through adopting ideas from Lovecraft.

This is great, except for the fact that the occult history of Theosophy is also intensely, deeply racist. That the authors in question also had such ideas didn't make anything better.

I do think that drawing on occult histories as a basis for sword & sorcery fiction is a great idea, but unfortunately the Theosophical one cast a long shadow over the twentieth century and even into the present one. However, there has been a recent attempt to move away from the methods and ideas of Theosophy in crafting a new occult history.

Occult histories are a useful technique that are intended to assist creative approaches to data by creating a structure at odds with the accepted ideas. By creating an approving context for concepts that are disapproved by the intellectual authorities of our society, they allow for questioning of things that are conventionally accepted. Whether this is a good idea or not is up to you, but I think that it's at the very least useful for creative works.

As it happens, there is a recent attempt to forge a new occult history that draws on both cutting edge and fringe archaeology instead of the fringe Indology that informs the Theosophical one. A "chaos magician" named Gordon White recently published a few works, among them Star.Ships. Despite the title, the book explicitly disclaims the idea that extraterrestrial aliens had anything to do with our world. Instead, it lays out an argument that world history and prehistory is better explained from an animist perspective than a materialist one, and offers a history that incorporates everything from the "impossible" mesolithic site of Göbekli Tepe through Gunung Padang, strange anomalies about the Pyramids of Giza to the weirdly specific coincidences of astronomical mythology around the world—such as why just about everyone from Europe and Asia through to North and South America associates Sirius with canines—and more. Recently, a find of petroglyphs in India that seem related in style to other petroglyph finds, and which date to the appropriate era, seem to provide further support for the idea. Whether a stepped pyramid identified in China bears any relation remains to be seen, though the dating makes it seem unlikely. 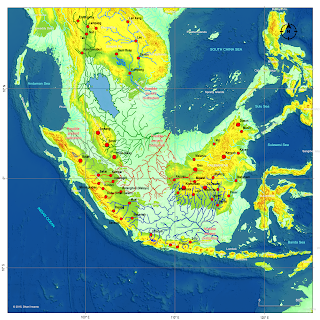 Notably, for my purposes, it lays out some of the possibilities of a prehistoric civilization in the Sundaland region, which is now largely beneath the waves after being submerged at the end of the last Ice Age. The civilization would have been a mesolithic hunter-gatherer society which, if White's ideas are examined, had a sophisticated shipbuilding culture with advanced astronomical navigation and possibly advanced social organization. Its influence, then, would have spread across the ocean, from the Middle East and Nile Valley to southern Asia, up into China, Japan, and the Philippines, across to the Pacific Islands, and even to South America. If Göbekli Tepe was related to this culture, then its influence might even have reached to the Anatolian peninsula and so maybe even into the Old European cultures.

Players and readers don't seem to get very excited about Stone Age cultures, though, so I think that it would be worthwhile to suppose that the Bronze Age got a very early start in Sundaland. Like Howard's Hyboria, this allows for city-states and armies at a time when, as far as we know, they were not particularly likely in the real-world prehistory. Since some people connect the idea of Sundaland with Plato's story of Atlantis—among other things, the dates happen to match up, where other theories of Atlantis require assuming that the dates were wrong in some way—we can equate orichalcum "mountain copper" with bronze, which seems to be the trend today anyway.

Anyway, a lot of details still to work out, but it seems like it should be an interesting sword & sorcery setting. With ancient serpent people and the occasional Pleistocene—or even earlier—monster, along with the Flores Island "hobbits", there is plenty of room for the kind of weird adventure that makes for a rolicking story.