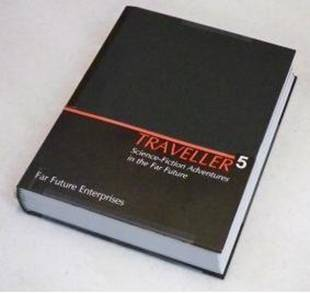 T5 was funded by a Kickstarter campaign last year. It succeeded wildly, generating nearly 300 thousand dollars (at the time, the record for tabletop roleplaying games), and, like many such oversuccessful campaigns it delivered the rewards much later than the initial estimate (in fact, there are still a few parts of the rewards that have not yet been delivered, but communication by Mr. Miller keeps confidence high that they will be delivered soon).

It is a huge, hardcover book, weighing in at nearly five pounds, and consisting of 656 pages, the last 16 of which are color plates, mostly showing rendered computer-graphic depictions of starships from the Imperial setting that is so closely tied to Traveller historically. The inside covers have useful information, too, the front inside having a photocopiable character card, the back with a simple map of the whole of known space in the Imperial setting. The interior of the book is high-quality, with a heavy-bond paper in actual stitched signatures.

The type is of a reasonable size, and the pictures are functional more than decorative. In many ways it is reminiscent of The Traveller Book, which is from me high praise. The cover design is the classic, and in my opinion perfect, design made famous with the original boxed sets of CT (and used also for GT and MgT): a black background with the name of the game in red with a red line coming from the left side over to the last character of the name, and some descriptive words in white (in this case, "Core Rules" above the red line and "Science-Fiction Adventures in the Far Future" below the name). So, it is a wonderful artifact from the perspective of appearance. The appearance is only marred by the unfortunately frequent occurrence of typographical and layout errors. These errors are not as frequent as in some previous editions (T4 being notable, though MT had its share). But no one is going to buy the game on its appearance alone. What matters is the content.

T5 continues the design that was present in T4. The basic system is one which generates a target number by adding an attribute and a skill level. Once this is done, and modified for circumstances, a number of dice based on the difficulty are rolled, with a roll of equal to or less than the target number indicating success. Most rolls are on 2 or 3 dice (average or difficult), but can range from 1 to 8 (or even 10 on very hasty attempts). All dice in Traveller are six-sided. There is an interesting rule that makes skill important, rather than relying entirely on native talent, which says that if the difficulty is greater than the skill, then an extra die of difficulty is added. This is basically the same system as in T4, except that T5 removes the clumsy half-dice of the earlier edition.

The rest of the book includes everything from character creation (there are now 13 possible professions to choose from, ranging from civilian ones to military and criminal professions) to starship design, psionics and merchant activities to wilderness and alien animals, just as in every other version. Added are sections on clones, robots, biological androids and synthetics, genetically engineered creatures, sections on vehicle, weapon, and armor design (which should make the people who hate vehicle design systems pretty happy, actually, being much simplified from the old Striker, MT, TNE, and T4 methods). Weapons and Armor are made by picking a basic type and adding adjectives describing its specific configuration. Anime fans will be happy to see the Oversized and Titan adjectives, which can, among other things, result in 4- or 6-meter tall battlesuits (mecha!) Vehicles are a little more complex, but much simplified from those older methods of laying out every element of the vehicle. In addition to all of that, there is the ThingMaker system, which allows a Referee to estimate the physical characteristics of any science-fictional gadget she can imagine, based on a system of organizing common sense, basically.

Probably the niftiest thing added is the QREBS system, which is a rating for an item's Quality, Reliability, Ease-of-use, Burden, and Safety. This allows specific items that are variations of a basic item.

Technology is now described from Tech Level 0 (stone age and such) on up through 15 (the Imperial TL in the default background) all the way up to 33, which is now treated as the technological limit of species that have not transcended existence. There is a method of figuring out the technological path of an alien species, including its path toward the Singularity above TL21, which is unstable and will quickly, within just a fairly short time (though still on the scale of generations) result in extinction, transcendence, or a voluntary or involuntary reduction to a sustainable level of technology (back down to TL21 or less).

There is a system for designing alien species. This is really quite good, but it does result in the annoying section of the book dedicated to senses. This is a full 13 pages, and is very technical. Worse, it is rarely used - in fact, there is an admonition to use it "only as really necessary" (an admonition that is fairly frequent in the book, actually, forming the basis of the MOARN "Map Only As Really Necessary" acronym, for example).

So, here's the thing. There is a lot, a lot, of useful stuff in there. Every Traveller Referee should probably have a copy for inspiration at least. I am especially happy with the new systems designed to help a Referee develop a setting (so that the game continues to be useful for more than just the Imperium setting). However, I am not very happy with the post-TNE system of rolling under a target, and even less with the many-dice system of T4 and T5. As I have said many times, to me MT is the ideal edition to date, and MgT approaches that one in quality (though GT includes some really useful subsystems for background design, such as the trade routes system in GT:Far Trader or the expanded world design in GT:First In). T5 just doesn't match that one, continuing down a path forged by T4 (and ignited by TNE). There is just so much in T5, though, that is worth adapting to other editions. I don't know if it's worth $75 to any but the most ardent Traveller fan, but at least it is available for considerably less on CD-ROM (at $35 it should be a good value to any Traveller Referee). I don't see the Jump Drive flash drives on the Far Futures website, unfortunately, but those are pretty neat.