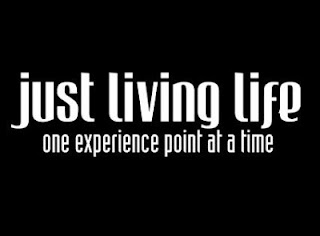 First, it should be understood that experience points are pretty much the same thing as victory points in wargames and miniatures games. What they represent in games can vary, but my own take is that they are a measure of the character's significance in the world. So, I can have my experience point awards disconnected from the things that would make a person better in our world, such as training or practice, in favor of things that make a character more interesting.

So, let's start with the traditional ones: 1 experience point per money unit acquired (gold pieces or whatever; I like the silver standard, so it would be per silver penny in my games) and 100 per hit die of foes defeated (modified by special powers).

Now, "defeating foes" can be expanded to mean more than just killing them in combat. Rescuing someone can give experience points based on the level/hit dice of the rescued party. Turned undead can be treated as defeated foes. Convincing a character or creature to do something significant by non-magical means can also be treated as defeating a foe. This wouldn't be something like "convincing" a merchant to sell you something, but perhaps convincing a king to go to war would fall into this category.

Experience for treasure gathered should only be given when the character spends the money for goods or services. In addition, some expenditures that give no direct benefits in game terms should give extra experience points, such as Jeff Rients's Carousing rules or Claytonian's variations (including Martial Training, Holy Sacrifices, and Esoteric Research).

Next, experience should be given for travel. Talysman's system at the link above seems a little complicated for my tastes, so I'd probably just go with giving experience for each map hex entered for the first time by that character, at a rate of 5 experience points per 5 mile hex or 6 per 6 mile hex (or 3 per 1 league hex, if I'm using that scale instead, as seems likely). I don't think that exploration of dungeons needs any specific experience award, since the value of such locations is based on defeating the foes and gathering the treasures within.

On the other hand, some locations should be worth an experience bonus just for visiting them. The Referee should set a value for various locations from 100 to 1000 experience points, with more given for more famous, powerful, sacred, beautiful, remote, or whatever sites. Going to the site and spending at least a day in the immediate vicinity (which implies sightseeing, examining, exploring, and so on) gains the experience bonus, but each site can only give its bonus once to a particular character. These bonuses should be made known to the players when the site is made known to them, so that the players can make rational choices about searching out such sites. That said, some sites might give experience points when discovered, if the discovery is also the first time the characters (and their players) hear of the site. This experience point bonus might completely replace the travel bonus of the above paragraph, or it might be in addition to it.

Training under a famous master should give an experience point bonus. Finding such a master and studying under him or her for 1d3 months gains a bonus of 50 experience points per level of the master. Special masters can increase that bonus at the Referee's discretion, up to 100 experience points per level of the master, but may require certain prerequisites from the character, while inappropriate masters cannot train a character at all. For instance, a tengu might give 50 experience points per hit die to normal fighter-type characters (if such a character can convince the tengu to train him at all), but 100 experience points per hit die to a kensai or shugenja (being character types closely associated with tengu in folklore). Meanwhile, a famous mage cannot train a fighter at all, but only magician characters. Keep in mind that this is not normal training, but training under a famous master of the art. As such, it should be difficult to gain such training, either because the master is remote, already has many students, or whatever. The character has to earn this training by dint of effort (whether just getting there or convincing the master of his worthiness).

What are some other objective goals that might give experience points?