A Kickstarter To Check Out 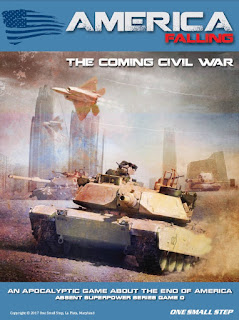 It's not a RPG, but wargames are also pretty awesome in my opinion. Anyway, this one has crossed its funding threshold, so it's going to happen. Take a look at America Falling, a wargame about near future conflict in the Lower 48, as the political fault lines in the US break apart and the nation is thrown into a second Civil War. There are rules for cyberwarfare, turning units to your side, and so on. I'm a little bit sad that Cascadia* didn't make the list of insurgent factions, but Ecotopia will do, and you can probably work up a rules variant that includes other insurgents. Speaking of rules, the rules PDF can be downloaded (pdf link) for free to preview it.

The stretch goals include making versions of the game for Europe and Asia, so that looks pretty fun.

Anyway, looks like it could be a pretty good game. At $63 for the game and shipping, it's not too bad price-wise either. Since the MSRP will be $80, it's a very good deal.

*I am aware of at least two different Cascadias, actually. The first and largest is a loose coalition of people who think that the Pacific Northwest can go it alone and probably should, especially if the rest of the country breaks apart. They're pretty interested in becoming a Canadian province in that event and have developed optimistic, if unlikely, processes for doing so. The second is identitarian and believes that the PNW should be a "white" homeland. From what I've seen, their plan for this, if you can call it a "plan", is stockpiling guns.