I have been working on the follow-up to the article on magic, but it has gotten out of hand a couple of times as I keep finding myself going off into tangents. It's a big topic, but I am trying to boil it down.

But today I am going to talk about AD&D and other D&Ds. 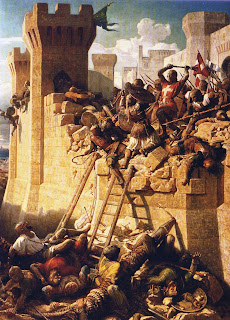 A big complaint some people have about the way that game is balanced is that Magic-Users increase in power at an increasing rate throughout their careers, while Fighters tend to increase steadily. This is formulated as the Fighter improving on a linear basis, while the Magic-User improves on a quadratic basis. It certainly does seem like a conundrum, since Gary Gygax was writing AD&D on the basis of many, many hours spent running the game at a real table, for hundreds of players. How could he have missed something so obvious?

As with many things, the answer is right there in the rule books.

Gary knew that Fighters and Magic-Users had different focuses for their careers. Each was, after all, a statement by a player about how they wanted to interact with the game and setting. Everyone knows this. The other classes, Cleric, Thief, and so on, are all later attempts by various players to come up with a particular and new way to approach the game and setting, usually based on a particular fictional role model. Clerics were to be Fearless Vampire Slayers in the vein of Van Helsing in the Hammer Dracula films, Thieves were largely the Grey Mouser from Fritz Leiber's stories (and, yes, a little bit of Vance's Cugel the Clever too), Monks were an attempt to model Shaw Brothers wuxia films, Rangers were Strider/Aragorn. Later, the Barbarian was to be Conan.

The thing is, this was supposed to be a model for the character's whole career, not just a set of powers that were nifty. How did Gary see these characters spending their late careers?

The Cleric, of course, would be a fantasy Bishop, in charge of a holy temple with all of the attendants that implied, as well as believing peasants who would provide an income through their labor. This reminds me that AD&D is also explicit that the majority of the world does not have a class or level, and so most religious leaders are probably not able to cast spells, though perhaps more people who are able to are drawn to holy orders and so there would be more than among the general populace. But I digress.

Magic-Users, it seems would retire to a tower, presumably to pursue their studies, but they would also have a body of laborers who would fund them in exchange, it is to be supposed, for protection from threats.

Which means that Fighters should probably also have a body of laborers to protect in exchange for tax monies. Like, I would say, a noble. And what is the source of a noble's power? The number of swords they can command. And that is exactly what a high-level fighter gets access to: a loyal troop. But they only get this power if they pursue it by clearing a barony of sorts. This is where many players lose the plot. There is a perception that only hardscrabble adventuring is fun, that the logistics of running a small domain make the game bog down into boredom.

But D&D was a wargame first, and the people who played it were wargamers at heart. For many, the whole point of play was to get to where they could command fantasy troops. Exercising power means dealing with other power-brokers in the setting, which means more opportunities for adventure, not fewer, since a baron can surely equip an expedition into a ruined castle, but murderhoboes can't usually broker deals that affect the lives of thousands or more.

But this still doesn't explain the Linear/Quadratic disparity, I can hear you say. Magic-Users, the argument continues, are still more powerful at any given level.

It is true that an individual Magic-User up against an individual Fighter will have a great advantage, with some abilities that the Fighter will have difficulty countering. That said, AD&D introduced a system whereby a Fighter could prevent the Magic-User from casting by interrupting the ritual. In addition, there were requirements for material components, as well as motions and words, that made the Magic-User's job a little more difficult. Adding these together, along with the overwhelming power of masses—one thing that people learn quickly when designing wargames rules that attempt to duplicate the D&D combat system on a mass scale is that even the most powerful of heroes will have a hard time against tens or hundreds of opponents. Swords & Spells, Battlesystem, and others found that they had to emphasize the abilities of heroic individuals, or alternatively games like Delta's Book of War learned that most D&D "heroes" weren't even worth representing on the battlefield as separate figures. Even powers like a Magic-User's spells, which seem overwhelming at the individual scale, turn out to have only small effect at the battle scale—enough, to be sure, to be worth simulating, but they only steer a battle in relatively subtle ways.

Myself, I think that a character should get experience for the money that they take in by taxing their domain. This encourages them to expand their domain and keep it safe from threats, since the more people they protect directly affects their experience gains. That would also encourage players to play the endgame for its adventuresome qualities instead of avoiding it in favor of more dungeon-delving, murderhobo adventures. More likely, these days, I'll simply give players experience for money spent rather than collected, but I won't make any distinctions about where they got it.