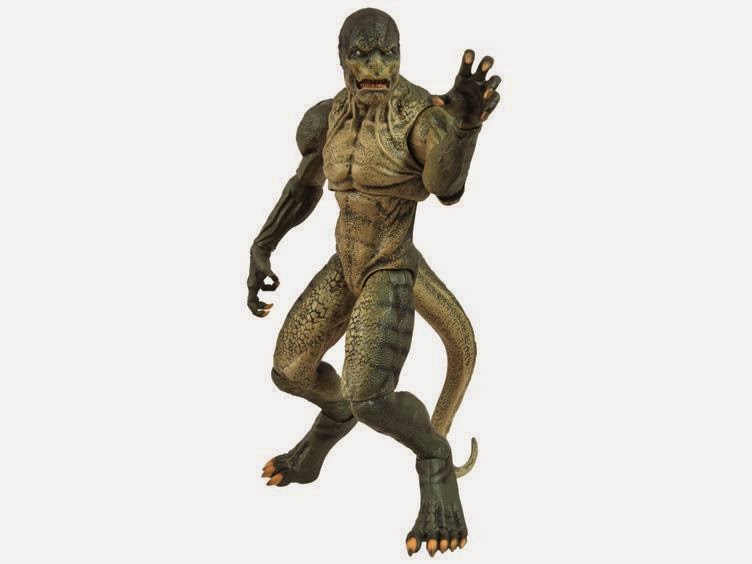 As I work on the options available to players, one area that requires a bit of work is the selection of aliens that the players may choose to play. Some are more involved than others, of course, but a number of the options I have been considering require only a single alternate class. For instance, the Haashek (or Gorrans, I still haven't decided) have only a single class option, similar to the Human class of Adventurer. It is called, predictably, the Haashek Adventurer, and the class is based on the Swords & Wizardry monster stats for the Lizardman. I'll give the writeup as it currently exists, and then discuss some of the features.

Haashek are reptilian humanoids whose civilization is centered around the abundant wetlands of their homeworld. They are very pragmatic, perhaps even cold and calculating by Human standards.

Natural Armor: Because some of the Haashek Adventurer’s Defense Bonus comes from the alien’s natural armor, they retain a +4 bonus to Armor Class even while wearing other armor. As usual, though, the extra bonus for higher level goes away when armor is worn.

Breath Holding: A Haashek Adventurer, like all of the race, can hold its breath for a very long time in comparison to Humans. If the specific amount of time becomes important, count it as 10 rounds (of 10 seconds each) for each point of the Haashek Adventurer’s Constitution score. This gives a range of from 5 to 30 minutes before the Haashek has to take a breath.


Claws: Haashek Adventurers take no penalty for attacking unarmed, due to their sharp teeth and claws.

In many ways, this class is much like the Human Adventurer, as it notes. There is an additional 1+1 Hit Die at all levels, and the progression of the Defense Bonus is significantly different (Defense Bonus is a special bonus to Armor Class given to a character who is not wearing armor; this is to encourage genre conventions, and I took the idea from the WotC Star Wars RPG). On the other hand, the Haashek Saving Throw (single saving throw system) is significantly worse than the Human one, which starts at 14. Since I plan to use the Saving Throw as the basis of any technical skills like piloting spaceships and so forth, the Haashek is at a significant disadvantage in any situation other than combat, but in combat they are definitely superior in most ways (though the Human advantage of being able to choose a category of weapons with which they gain a +1 bonus to hit, and if hand-to-hand weapons a +1 bonus to damage, is pretty helpful too). The experience chart for the Haashek Adventurer is worse than the standard Human Adventurer, too, starting at 2000 xp for 2nd level, where the Human achieves 2nd level at 1500 xp. All classes in the game double the required xp at each level increase, with no level limit other than that geometric progression. The Haashek also gains a few minor benefits based on the monster writeup in Swords & Wizardry, mainly movement and breath holding, but also the natural weapons and armor.

I'm still not sure what the Haashek/Gorrans should look like. The picture above is one way to take it, but I'll probably leave it up to the artist I choose to illustrate them when I get to that point. Maybe they look more like Sleestak, or Gorns, or whatever.

Other aliens may have multiple class choices. For instance, the Koni ("coney", get it? I kill myself) will be able to choose from Adventurer, Seer, and Tinker in my current thinking. These classes somewhat parallel the Human options of Adventurer, Psychic Warrior, and Scientist, but will be somewhat different to adapt the specific details of the Koni race of course, such as generally reduced Hit Dice, sneakiness/unobtrusiveness, and so on. Mostly, I am thinking of ways to adapt some of the types from Bunnies & Burrows to that alien race and the needs of a raygun fantasy setting.

One other thing: I am thinking about changing the name of the game to Rockets & Rayguns, to keep the assonances of Dungeons & Dragons. Do you think that's too much? Is Spectacular Science Stories a better title?