I guess that it's going around, but I saw Joseph Bloch do it, and now I am. A list of five games that I'd like to run, at least as I am sitting here right now tonight. 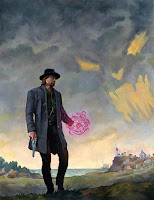 1. Spirits of the Trail: This is a sixguns & sorcery game, in which the players are traveling by land from the settled Eastern States to the great port of the west coast, Angel City. It would be a picaresque of adventures through the towns of the sparsely settled western territories where their only protections are the guns at their belts and their spirit allies. At this point, it would be run using GURPS rules, since not only does that game have excellent methods of handling gunfights and hand-to-hand melees, but also the sort of magic I want in the poorly-named "Path/Book Magic" system found in GURPS Thaumatology, which keeps me from having to write a new one to fit into something like Boot Hill or whatever. 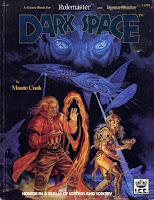 2. Dark Space: Back in the '80s, a guy named Monte Cook wrote a setting book which was specifically intended to merge Rolemaster and Space Master in a cluster of worlds that included faeries and Lovecraftian horrors, adding biotechnology on top. I have always been interested in that setting, but never had a chance to play in it. I wouldn't mind running it. 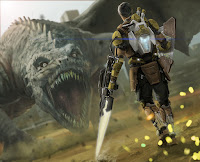 3. Flanaess Sector: I talked about using AD&D to make a science-fiction setting, using the outlandish monsters of the D&D underworld as the basis of aliens. Illithid, Gulguthra, Flumphs, and Grell, among many others, seem like they would make for a fascinating setting in the stars. This would be the hardest to do right now, as I haven't done the work of designing the new character classes and technology I'd want to use. At least 1st edition AD&D already has a psionics system, though.

4. Under the Moons of Mars: I really, really want to run a game set on a Leigh Brackett/C.L. Moore-inspired Mars. I'd probably leave open the possibilities of traveling to Venus as well, but that wouldn't be the focus. I don't have a good opening situation for this yet, but it wouldn't be hard to come up with one. GURPS Mars had a good version of such a world in its "Dying Mars" chapter, which I'd probably use as the basis, though redesigning the canal system to match Lowell's canal maps more - though the canal through the Valles Marineris is so awesome that I'd probably include it nearly unchanged. 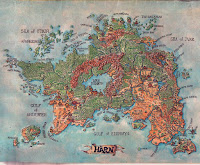 5. Hârn: Using Hârnmaster. There's so much to love about that setting, but I've never gotten a chance to play in it. I think that I might prefer to have someone else run it, but I'd do it.