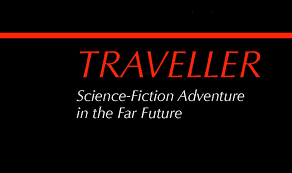 It's pretty well understood, I think, that Traveller started out without an explicit background setting, then developed one over time. There were some implicit setting assumptions, to be sure. In the 1977 edition, it was understood that there were shipping lanes along which it was easy to purchase a ticket or Jump navigation tapes to a destination, but outside of which travel was more difficult. There were Air/Rafts, which were some sort of anti-gravity sled, and in fact which were taken wholesale from the Dumarest of Terra series of pulp sci-fi novels (a while back, I discussed the structure of Traveller play; what I didn't note at the time was that basic structure was strongly rooted in the stereotypical Dumarest plot, in which the protagonist arrives on a world, broke and in need of passage to the next world to continue his lifelong quest, gets involved with some figure who can provide the necessary cash in exchange for some adventurous task, and then completes the mission*). This implied a system of such shipping lanes. Then there were things like the Travellers' Aid Society, membership in which would provide monthly tickets for travel. Some of these have been retained in the current canon of the Third Imperium, sometimes with subtle modifications, but others have been dropped quietly and ignored. Sometimes that is for good reason—the shipping lanes of the 1977 edition are great on paper, but I dare you to generate a subsector using the procedures given. Frankly, just the number of lines on the paper are unwieldy even if using a lower density of star systems, say 1 in 3 instead of the rule given of 1 in 2. Once the Referee expands their setting to more than one subsector, the space lanes become nearly impossible to manage (though I can imagine a computer-based system that might work, such things were not practical in the 1980s, and aren't even well-supported now).

Anyway, let's talk about some of the setting assumptions that were dropped from canon, why they were dropped, and what they could bring to a non-3I setting. I'm not going to rehash "death during character creation", since it isn't really a setting element, per se, and anyway it has been discussed repeatedly elsewhere. Maybe I'll discuss it another time.

For starters, there's a big one, Jump Message Torpedoes. First introduced in Adventure 4 Leviathan, I believe, these were communications torpedoes that a ship could send through Jumpspace to carry messages. These were never well defined, not even being given a Jump rating to indicate how far they could go, much less a cost, mass, or any other factor that might indicate their limitations. Presumably, like all Jumps, their travel would take a week. Given the Jump range of the starship at the center of the adventure, they probably were capable of at least Jump-3. Probably. However, in the end they ran up against two factors that did become canonical for the Third Imperium setting: a Jump drive could only be fitted in a hull of at least 100 tons (remembering that a hull "ton" is a measure of volume somewhere around the volume of 1 tonne of liquid hydrogen), and the implicit assumption that for some undefined reason a conscious, sapient being must be in control of a vehicle entering Jumpspace—though later canon did allow for computer artificial intelligence to be "sapient" in this way, but the robots and computers of the main Third Imperium setting are not sophisticated enough for this purpose; adding artificial intelligences to the setting was part of the long-term intention behind Virus in The New Era. If not for these factors, the Imperial network of X-Boat couriers wouldn't be necessary and the Navy would have limited use for its courier vessels.

Next is the association of Marines with Cutlasses. In classic Traveller and in MegaTraveller, a character wielding a Cutlass is capable of causing meaningful damage to a character wearing Combat Armor or even Battle Dress (powered armor). This was because the source material, pulp sci-fi stories, often depicted space marines fighting space pirates with melee weapons during boarding actions, and the game rules followed suit. This also resulted in the Marines career (and others) being likely to give a character melee weapon skills, and in the case of Marines, specifically Cutlass skill. Starting with Traveller: The New Era, this capability was reduced to match perceived reality, so that muscle-powered weapons simply weren't able to penetrate advanced armor being worn in a battlefield context. From TNE onward, Marines were no longer given skill in Cutlass as part of basic training, since it was no longer part of how the setting was understood, except that, for whatever reason, the first Mongoose edition of Traveller provided Marine recruits with the option of gaining Melee (Blade) skill, presumably in imitation of the Cutlass skill in the earliest editions, though the MgT system makes melee weapons useless against advanced armor like the other later editions. That lack of thinking things through is one of many, many reasons that I am not fond at all of the Mongoose edition, though to be fair I have not seen the second Mongoose edition.

I was going to discuss double-Jumping, the process by which some of a cargo hold is filled with liquid hydrogen in order to allow a second Jump without refuelling, usually done when a ship, due to distance limits of the Jump drive, has to Jump to empty space and then make a second Jump to reach a distant star. This is most often done when a Jump-1 ship needs to get across a 2 parsec distance. However, I'm pretty sure that this is canonical now. There was a time, a road not taken, when a Jump drive could not Jump to empty space in that manner. Jump-1 ships therefore weren't able to leave the so-called "Mains", stretches of star systems that can be reached with a 1-parsec Jump. I'm not sure that limitation was ever actually written into the game, but was instead a holdover from the board game Imperium that was a predecessor of Traveller, and was also, I think, related to the origin of the shipping lanes I mentioned toward the beginning.

What are some other roads not taken in Traveller as it developed, ideas that maybe seemed good at the time, but were dropped from the game as it became apaprent they didn't fit in with the setting as it was developing? Obviously, there's the "split timeline" phenomenon in which the official setting still includes the Rebellion and Virus, while some campaigns take place in timelines where the Rebellion never happened, or perhaps just that Virus never did, but I'm thinking less of story-oriented, "metaplot" concepts and more in terms of setting elements.

*In many of the more recent editions of Traveller, it has been an article of faith that adventuring groups should nearly automatically have access to a starship, and so mechanisms to enable this are presented such as "ship shares" or whatever, but this assumption was not present in earlier editions.

Email ThisBlogThis!Share to TwitterShare to FacebookShare to Pinterest
Labels: Traveller