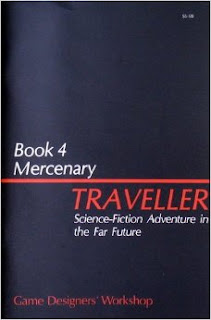 I previously discussed the default assumed game in Traveller, in which the players maneuvered their characters to scramble for payoffs from patrons and sometimes following up tantalizing rumors. That wasn't the only way to play the game, though, and a few other options were explored through the various expansions and editions. I'll cover some of these in this occasional series, and who knows? Maybe I'll outline some others.

The first alternative game was in the very first supplemental release for Traveller, the ground military expansion Book 4 Mercenary. (It's possible that Supplement 1 1001 Characters preceded it since both were released in the same year, but I haven't been able to confirm which came out first and both came out the year before I played my first roleplaying/adventure game.) Mercenary provided an expanded character creation system, which is all well and good, but more importantly it introduced the idea that the players could be employee-soldiers in a mercenary company, fighting for pay where they were told to go by their superiors, hoping one day, perhaps, to become those superiors. It included a rudimentary mass combat system (requiring a great deal of work by the Referee, since it was nearly nonexistent), and it also included the patron-substitute of a Mercenary-based campaign, the Ticket. Tickets were descriptions of the mission for which the company was to be hired, including objectives, pay, and other details. Some of the patrons in 76 Patrons, in fact, are Tickets instead of people. A typical Ticket might have the players travel to a backwater planet on which the locals were gearing up to fight each other and train the troops of one side or another. No doubt, many Referees introduced all sorts of complications. This campaign didn't include the detailed structure of play found in the default game, but that is because its own structure was very simple and mission-based. Eventually, GDW released a mass combat, or rather skirmish-level, miniatures game that interfaced very well with the Mercenary campaign frame.

Mercenary-based games were rather unlike normal Traveller games. In the normal game, the players would have maximum freedom of movement and choice of which adventure threads to take up. In a Mercenary-based game, the players went where they were told. That would usually be by the Referee, at least at first. Later, one or more of the players might find themselves in charge of a mercenary group. In some cases, the Referee would take a player whose character had long military experience and put them in charge from the beginning. In the cases where one or more players were in charge, that player or those players would be able to pick from a selection of mercenary Tickets proposed by the Referee, giving them somewhat more flexibility.

The course of play was more flexible than the day-to-day scheduling of the standard game, too. Once a Ticket was accepted, the time to travel would be simply calculated and then assumed to go without incident (unless the Referee had something up their sleeve). From there, the situation would play out in a more freeform method, the Referee adjudicating the results of the plans proposed by the players. Depending on the Referee, this could be either narratively handled or structured as an ad hoc wargame, with maps to regulate movement and perhaps Striker to handle direct contact. Striker was designed with roleplaying in mind, in fact, being centered on "orders" and the time of transmission for those by various methods of communication (providing the real benefit of battlefield computers, as an aside), and using a simplified form of the Traveller combat system so that injuries to two dozen soldiers didn't need to be tracked closely, itself based on the system originally included in Azhanti High Lightning. That simplified system would ultimately be used in MegaTraveller after some modification.

After the Ticket was completed and the unit was paid, the Referee would have to work up some expenses (replacement ammo and supplies, for example), plus the troops needed to get paid, and then the unit would look for another mission. Repeat as necessary and as interest held.

The main disadvantage of this campaign frame is the fairly straight-ahead nature of it: the players are given a mission and must solve the mission to gain the reward. There is little room for the players' characters to have their own goals that they can pursue with as much dedication as the default campaign framework. It isn't quite a railroad, as the players are given much leeway to decide exactly how they intend to carry out their mission, but the goals are not their own. That said, since it is a game in which the quantifiable goal is the pursuit of money first and foremost, it is perfectly possible for the characters to become wealthy enough to be able to make their own plans, eventually. This framework is probably most useful to players who prefer the more modern ways of gaming, as a compromise between the sandbox and the "adventure path", but it should also appeal strongly to those with an interest in military SF.

Note that it was possible to mix the Mercenary campaign frame with the default one, but I don't know anyone who did that, and I am not sure if it would be as interesting as either frame separately. That said, a campaign that alternated between Tickets and the players' characters getting in undirected trouble (using the default encounter/patron system) while on leave between the Tickets might be quite interesting.

Another interesting thing about the Mercenary campaign structure is the fact that it may have the most flexibility, ironically, in terms of the flow of any particular session. While the standard game has a pretty fixed "flow" (find cargo/freight, find patrons/rumors, resolve patrons and random encounters, rinse and repeat with only occasional variation), a mercenary Ticket can take a large number of forms, from the Cadre Ticket in which the players train the native troops to the Assault Ticket in which they go in guns blazing, and any number of others that the Referee can dream up. Again, the expense is that the stories that arise inherently owe a lot more to the Referee and less to the players and their characters, but some groups may find this structure worth it.