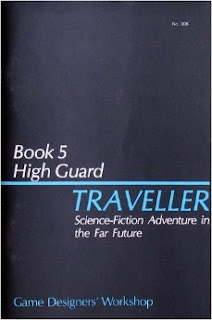 After the release of Book 4 Mercenary showed that there was a market for expanding on the careers of the original game, the next obvious direction to look was the Navy, those masters of the spaceways. Where Mercenary added more guns and other ironmongery, Book 5 High Guard added a new spaceship design sequence that could handle ships up to 200 times larger than the largest ships of the original spaceship design rules! To supplement those monstrously large spaceships, the supplement also included a new spaceship combat game that could handle larger numbers of spacecraft than the miniatures-based one from the original books.

Which was all fine and dandy until you realized that they forgot to include anything to actually do with those big spaceships and battle fleets. Unlike Mercenary, the authors forgot to include a campaign framework that made those spacecraft useful to anyone's game. So they sat down and did two things. 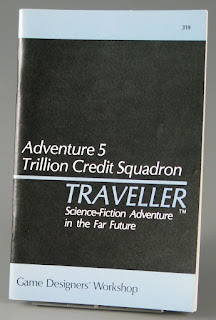 First, they rewrote the supplement. The first edition was kind of a mess, and the ships that came out of that design sequence weren't very interesting. Second, they released Adventure 5 Trillion Credit Squadron. TCS, as it quickly became known, was a radical departure at the time, presenting a campaign system with a rudimentary "domain" game that served to provide a reason for large fleets of giant spacecraft to fire weapons at each other. The players would play combination Admiral/Planetary Government and send ships at each other in a sort of roleplaying/wargame mashup. Except that there was a lot less of the roleplaying, a situation that would have to wait 16 years to be repaired, albeit imperfectly, but that is so different that it really represents a different campaign frame, and I will come back to it in a later installment.

In TCS, the game is changed to play in weeks, and each week allows six phases: Jumps, Communication and Intelligence, Battles, Changes of Control, Refueling, and Final Operations. I won't go into too much detail, but most of those phases are pretty self-explanatory. The Final Operations phase is the one in which campaign-level events occurred, such as ordering new ships, ship construction being completed, multi-week activities like being repaired, and so on. Planets would generate revenue based on the Traveller world statistics (UPP or Universal Planetary Profile), and the relative value of wealth from one world compared to the others based on technology level and the local starport. The campaign frame was more like a wargame than a roleplaying game, but that was OK.

Or, the Referee could just specify that a certain technology limit and certain other limits (minimum Jump capability, number of pilots available, and so on) applied, and let two players generate squadrons that just fought it out in one big battle (this method was also the basis of the Tournament Play method). TCS was pretty flexible.

Another way to use High Guard came up in one of the issues of Journal of the Travellers' Aid Society, in which a campaign frame of active-duty Navy and Marine personnel would engage in mission-based adventures. The article included a way of generating the pay scale for those services and gave some advice and basic adventure seeds (one piece of advice was to watch or read The Sand Pebbles for ideas of the sorts of trouble that Navy personnel can get up to on shore leave, which is pretty depressing advice really; it's a good book and movie, but not particularly a happy one). So, out of one supplement, two or so campaign frames ultimately came around. The Active-Duty campaign, of course, was a little more under Referee control than the basic game (or TCS), much like the Mercenary campaign framework, and shares similar advantages and disadvantages. It does point out that we are seeing the same forces that were present in the hobby as a whole at the time affecting perceptions of how to play Traveller. That would become a big problem with the next edition of the game, MegaTraveller. Many of the sandbox tools remained to be used, so that edition wasn't entirely lost to the "storyteller" style of gaming. In fact, as we shall see, several campaign frames that are very much sandbox oriented have yet to come about by the end of classic Traveller.