Character Improvement In MegaTraveller (And Jack Of All Trades) 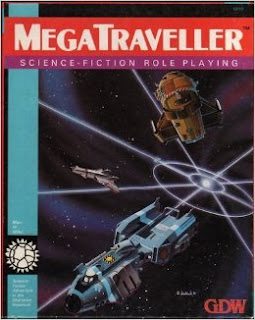 After a great deal of criticism over the unorthodox character improvement system in classic Traveller, the design team for the revision, MegaTraveller, decided to include a system that was more like that used in other games, allowing a character to improve through using the skills rather than through an extended program of study and practice. It was still different enough from the improvement systems of other games that it was overlooked by many, but mainly that was due to the poor layout that was common to games of the time. It was placed in a counterintuitive point in the rules, and only took up three pages (plus a paragraph in the Referee's Manual, though that wasn't explicitly tied to the improvement system - which is another mistake of presentation in my opinion).

MegaTraveller decided to include a system not entirely unlike the RuneQuest system of improving skills and attributes. Each session of play, the Referee would award to each character an "Adventure Tally" or "AT" in a skill that saw significant use by the character during the session. Each skill could only have two ATs per one-year period, so each was marked with the date in standard Traveller Imperium date format, so for instance "AT-Stealth (023-1120)", to help keep track. At the beginning of each session (or at the end of the current one after ATs are handed out, it doesn't matter so long as it is kept consistent), the player could try to improve any skills with ATs. It requires a Task check of Formidable difficulty (so needing a base of 15+ on 2D), to which roll the player can add the Int modifier (+0 to +3, usually +1) and the number of ATs on the skill. As always, there is a limit of +8 on the roll, so the best chance of success is going to be a roll of 7+. A success would give the skill at level 0 if the character did not have it, or raise it one level if the character did have it at level 0 or greater already. When a successful roll to raise the skill happens, then the ATs for that skill are erased (but erasing ATs does not occur until the skill is raised, so there is no penalty for failure on this roll other than not gaining the skill) and the character can gain more ATs as normal.

Now, it is really difficult to use a skill that the character doesn't possess at a level of at least 0, because the difficulty of any such Tasks is increased by a level, or 4 points harder on the dice (from 7+ to 11+, for instance). There are two ways of gaining a temporary level 0 in a skill, though. First is by observation. Watching someone else performing a skill allows a character to make a Task check to gain a level-0 in the skill for one use. Also, it is possible to use computer programs to assist and gain a level-0 on the same temporary basis.

Attributes use a similar system of ATs, but the player must specify which single attribute they wish the character to be pursuing this session, and if that particular attribute sees significant use the Referee can award it an AT.

In addition, characters can search for and undergo formal training in a skill or attribute. This requires a Task check to find the training program, then a Determination Task to stay committed. Failing the Determination Task can result in wasting the time and money for the program, as the amount of time the Task takes is used to see how long before the character drops out of the program (and this can represent showing up but not applying oneself to the course of study)! Once formal training is completed, there is another Task to see if the skill or attribute is gained or improved. A typical course of study requires 200 hours, arranged as appropriate (so an intensive 5-week course of 40 hours of study per week or self-study at 5 hours per week for 40 weeks or whatever). Such programs normally cost around Cr10 per hour.

Social Standing is improved or lowered by paying more or less than normal for upkeep (normal upkeep cost is Cr250 × Soc per month), though increasing Soc is limited to level A (10), since noble status can't be gained by this method. Such levels of Social Standing need to be granted by Imperial authorities, I would imagine.

Jack of All Trades skill has always been a strange beast in different editions of Traveller. Classic Traveller was fairly obscure about how it should be used, though reading the rules seems to indicate that any level of Jack of All Trades allows the use of any other skill as if it were possessed at level 0, with no additional benefit to higher levels. Other editions of Traveller have allowed levels of Jack of All Trades to offset penalties for lacking skill (GURPS Traveller makes it into an advantage that adds to skills from their defaults, Mongoose Traveller adds to attempts to use skills that aren't possessed by the character, and so on), but MegaTraveller took a different tack. In that edition, it was possible to retry failed tasks that weren't instant (instant tasks are things like combat tasks and whatever that may take some time in an absolute sense, but not any significant amount). A normal failure (a failure by 1) allows a free retry, but an Exceptional Failure (failure by 2 or more) requires a Determination Task check. A failure on that Task increases the difficulty of the Task by one level, while a success allows a retry at the current difficulty. Retries, of course, take the normal amount of time. Jack of All Trades skill allowed the character a number of free retries of Exceptionally Failed Tasks equal to the level of the Jack of All Trades skill. This is "representing the character's resourcefulness", which seems like a really good way of modeling it.

Email ThisBlogThis!Share to TwitterShare to FacebookShare to Pinterest
Labels: MegaTraveller