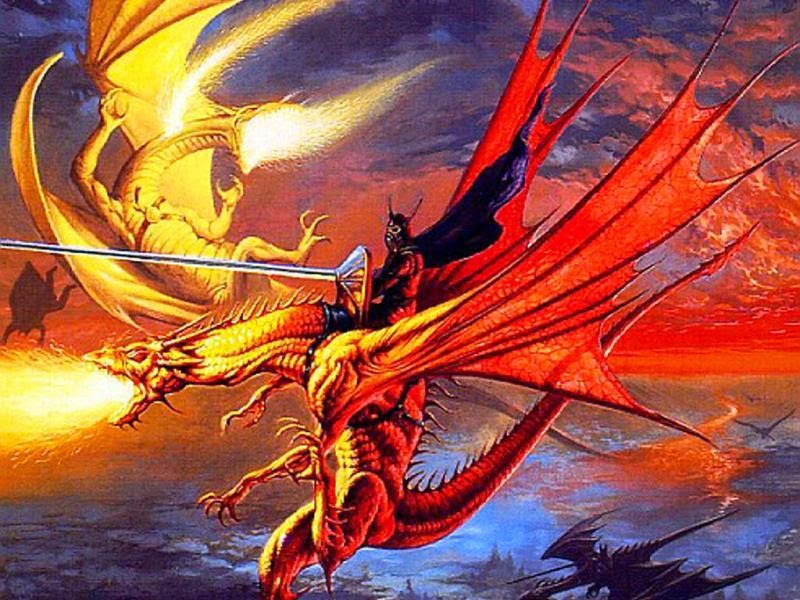 Dragonlords are a subclass of fighter found only among the Daling people of the Middle Sea world. A dragonlord must have a strength of at least 12, an intelligence and wisdom of at least 15 each, and constitution and charisma scores of no less than 10 each. Dragonlords do not gain bonus experience due to high prerequisites. Since alignment is handled quite differently in the Middle Sea world, alignment is meaningless, but in other games dragonlords could be of any alignment, usually coming to match that of their bonded dragon. Prospective dragonlords apply for training during the midsummer festival of their sixteenth year, undergoing difficult tests of skill, knowledge, wisdom, strength, and character, and only about one in 250 or less is finally selected for training.

Upon selection, the dragonlord aspirant is placed in a specially prepared cave with several dragon eggs, all ready to hatch, with several other new aspirants. As the eggs hatch, the newborn dragons imprint on the young men and women and the new dragonlords become squires (1st level dragonlords). To find out which type of dragon imprints on the new squire, roll 1d10: 1 – black, 2 – blue, 3 – brass, 4 – bronze, 5 – copper, 6 – gold, 7 – green, 8 – red, 9 – silver, 10 – white. The size of the newborn dragon should be determined as normal, and they will age as normal for dragons. All such bonded dragons are capable of speech (and, therefore, spellcasting when appropriate). Because of this bonding ritual, no one may change class and become a dragonlord later in life.

To determine starting age, roll 1d4 and add it to 16. The bonded dragon will be of an age equal to the d4 roll.

The primary benefit of a dragonlord is the presence of the bonded dragon. Dragons, however, do not spend all their time with their riders, preferring to go off and visit their draconic family, spend time alone, and so on. This is especially the case while the dragon is young and the dragonlord inexperienced. The base chance of a dragon being with the dragonlord is rolled at the beginning of each week, and varies by season as follows:

In addition, dragons will always leave their riders during the weeks of the four high holidays of the dragons, the solstices and equinoxes.

There are several modifiers to the base chance of the presence of the dragon. These are given below:

A dragonlord’s multiple attacks follow the standard fighter progression. They get 1/1 from levels 1-6, 3/2 from levels 7-12, and 2/1 at levels 13+ with any thrusting or striking weapon. In addition, as with other fighter types, dragonlords may make a number of attacks equal to their level in a round of combat in which they are fighting monsters of 1 hit die or less or non-exceptional (0-level) humans.

If the bonded dragon dies, a dragonlord may search out and petition a dragon that once had a bond with a dragonlord but whose dragonlord has died and attempt to form a new bond. The bond can never be as strong as the original, however, and the dragon will subtract 10% from all checks for presence. The details of this quest are up to the DM.

(This class was modeled closely on the class presented in the RoleAids supplement Dragons, by Cory Glaberson, but has been modified to better fit the Middle Sea world, and to suit my own tastes.)

On an unrelated matter, after much consideration and examination of Stonehell Dungeon, I have decided that players may choose nonhuman characters, but may only choose those nonhuman races listed in the Players Handbook, and level limits will be enforced. Whether I will use the strict limits in the PH or the slightly looser limits in Unearthed Arcana remains to be seen. Of the new classes (some of which I will be presenting over the next couple of weeks), dragonlords and timelords may only be human (and the latter may only be from a particular sub-branch of humanity), outdoorsmen may be human, half-orc, or half-elven, and psionicists may be half-elves. The witch class is still in flux, though I expect that I will write my own version, based on the class as presented in Dragon magazine and Timothy Brannan's The Witch. When I finish it, I will probably present it here. Other classes are taken directly from items that are currently in publication: specifically, bards and mountebanks are from Joseph Bloch's Adventures Dark and Deep (or from his supplement for AD&D, A Curious Volume of Forgotten Lore). Those classes will have the racial limits given in those products.